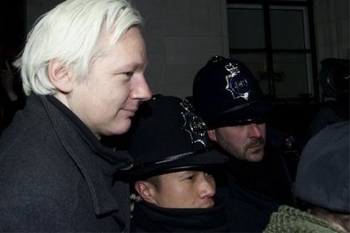 Nearly two months after he took refuge in its London embassy, Ecuador is reported to have agreed to grant the WikiLeaks founder Julian Assange political asylum.

Reports in the The Guardian overnight said the Ecuadoran president Rafael Correa had agreed to the request.

There are questions over whether Britain will grant Assange permission to leave the country. He has breached the conditions of his bail and can be arrested as soon as he leaves the Ecuadoran embassy in London.

The news about Assange comes at a time when WikiLeaks is very much in the news. Emails from the US security firm Stratfor, which it released last week, have drawn attention to a system known as Trapwire which is being used to analyse data and predict likely security threats.

Trapwire was created by Abraxas Corporation. It was moved to a separate division of the company, known as Abraxas Applications, before the parent was bought by the multinational Cubic Corporation in 2010.

Whether Trapwire can live up to the marketing hype that has been pushed about it, is unknown. What is known is that Stratfor was getting a cut for pushing sales of Trapwire and that a number of former CIA spooks were part of Trapwire.

Around the time when it released the emails with information about Trapwire last week, WikiLeaks came under an intense distributed denial of service attack. A group named AntiLeaks indirectly claimed to be responsible but whether a private group could organise a DDoS of the magnitude which WikiLeaks experienced is open to question.

Speculation thus arose whether the DDoS had taken place to make it difficult for interested parties to access the emails relating to Trapwire.

More in this category: « GNOME OS: a bid to catch up with the big boys Assange has done no wrong. But tell that to Uncle Sam »
Share News tips for the iTWire Journalists? Your tip will be anonymous