Age reporter accuses Vic premier of deceit, but then has second thoughts Featured 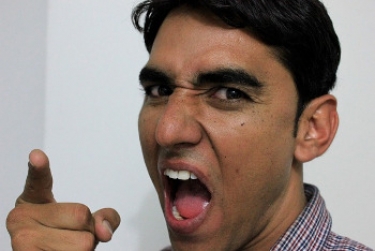 Image by ashish choudhary from Pixabay

With the elections in Victoria due in about three weeks and the incumbent government looking very much like it will romp home, media in the state are resorting to every tactic in the book to push their barrows.

It is probably this kind of approach that led to Paul Sakkal, a political reporter for The Age, accusing the Victorian premier Daniel Andrews of making an "extraordinary and deceitful statement" when the latter issued a release about a story on the state's Independent Broad-based Anti-corruption Commission.

Sakkal, apparently, had second thoughts about his comments, as he deleted the tweet in question. But then deleting such things from Twitter does not always ensure that they disappear, as one can see from the image below.

But let me not put the cart before the horse. Sakkal's tweet came in the wake of a report he filed last week claiming Andrews had been subjected to questioning by the IBAC as part of an inquiry into suspected corrupt conduct.

He was collecting information for a follow-up, but when he sent queries to Andrews' office and a couple of others, IBAC obtained an injunction to prevent publication of the story. The Age then tried to get the injunction lifted, but failed to do so. The newspaper was clearly miffed about this, as it carried an editorial claiming that this kind of block was not in the interest of residents of the state. 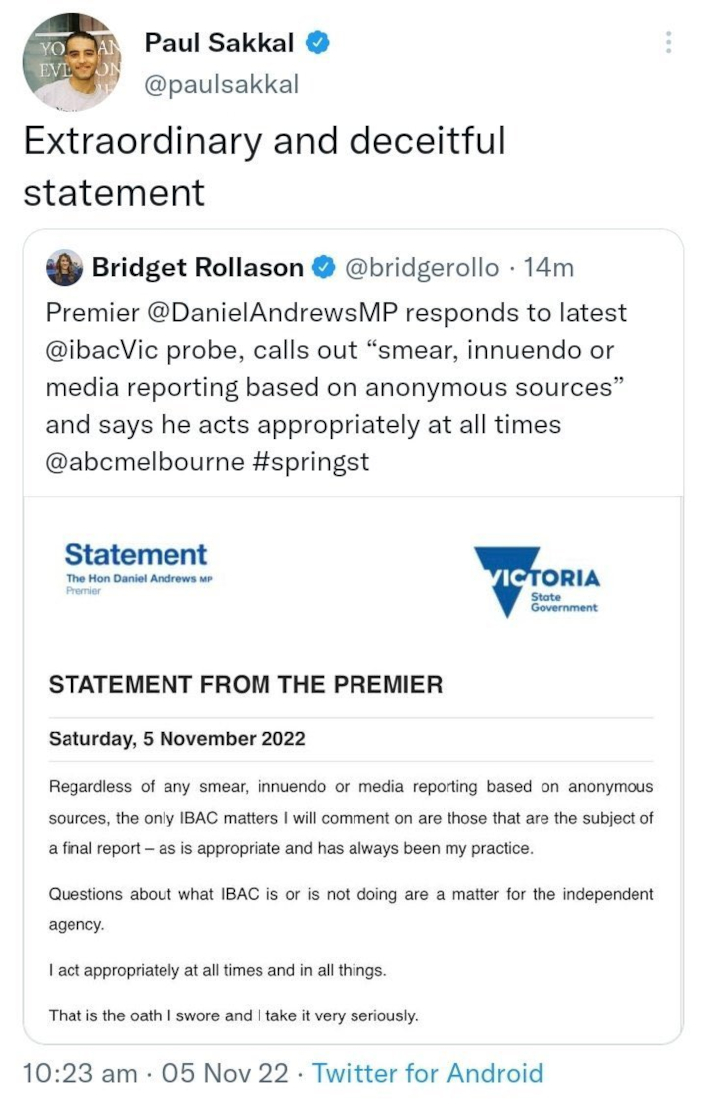 The commission then suggested that there should be laws put in place to make it an offence for journalists to publish anything about its inquiries before they were made public. Andrews says he has no intention of going down this path.

On Saturday, Andrews issued a statement in which he said, "regardless of any smear, innuendo or media reporting based on anonymous sources" he would not comment on any IBAC matters apart from the commission's final reports.

And he added, "I act appropriately at all times and in all things. That is the oath I swore and I take it very seriously."

Wasn’t The Age claiming that this election would be different, that they would “focus on what Victorians want to discuss”? Effing joke!

Andrews' statement was tweeted out by ABC reporter Bridget Rollason, and it was in reply to this that Sakkal's rather injudicious tweet was sent.

As I commented on an earlier occasion, The Age, the smaller of the two main papers in Victoria — the other is Rupert Murdoch's Herald Sun — has always been at pains to project itself as unbiased in its coverage, a claim it made prior to the federal election in May as well.

At the time of the federal election in May, the editor of The Age, Gay Alcorn, wrote in one of her letters to subscribers [which for some curious reason was placed behind a paywall] that the paper had not moved to the right.

This was to counter the fact that many people believe the paper — and its stablemates at Nine Entertainment, the Sydney Morning Herald and the Australian Financial Review — tend to tilt towards the right as Nine's chairman is Peter Costello, the erstwhile federal treasurer under John Howard for 11 years.

Sakkal called me as soon as he received an email I had sent, asking for his take on the issue. He said he did not wish to say anything for publication.

Perhaps The Age should exercise some restraint on reporters who tend to get emotionally involved in their reporting.

More in this category: « Helping Optus spin breach fallout: the AFR shows the way ABC's Trioli wants to know if IT systems can do without admin users »
Share News tips for the iTWire Journalists? Your tip will be anonymous