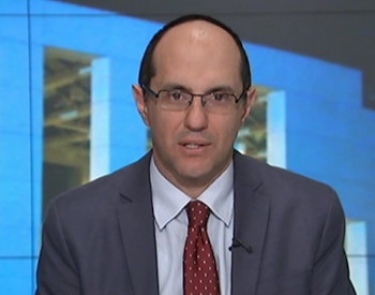 Phil Coorey: one of the government's mates in the media. Courtesy ABC

The Australian Financial Review, which claims to be one of the country's top newspapers, does not appear to know the difference between data from a poll and a focus group, judging by a report written by its political editor, Phil Coorey, on Thursday.

This level of ignorance is not surprising; the Sydney Morning Herald, another newspaper owned by the same company, Nine Entertainment, showed that it was clueless about encryption, boldly proclaiming in October 2020 that technology companies could open "very small" encryption backdoors to enable government agencies to snoop on encrypted communications.

But in this case, the AFR's screw-up appears to be an error of commission.

Using what were answers to two focus groups — consisting of five people each — Coorey concluded that undecided voters were leaning towards voting for the Coalition Government. 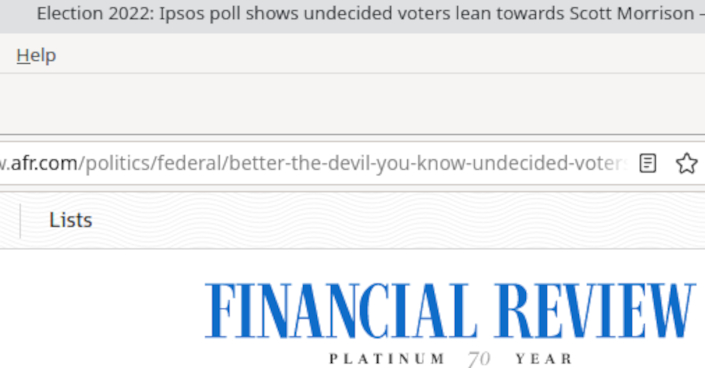 The original headline on Coorey's article can be clearly seen here.

The headline on this report was changed after it was published, but as the screenshot in this article shows, the AFR referred to it as a poll, not data from a focus group.

Coorey is well known as a backer of the incumbent government and often provides a handy question during a media scrum to haul his mates out of trouble.

The Coalition has entered the election campaign trailing the Labor opposition, and needs all the help it can get from its friends in the media to get across the line. 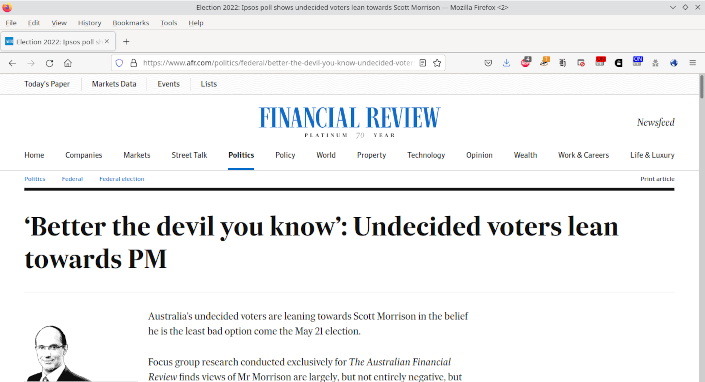 The article with the new headline.

Coorey's very definite conclusions from the focus groups' data was in sharp contrast to the views of the company that conducted this exercise.

Phillip Coorey has been left red faced after authoring a story which claimed an exclusive “poll” favoured Morrison over Albanese — the “poll” was later revealed to be a survey of only two groups of just five people. Ipsos says there are no definitive results. #AusVotes2022

But this was buried in the report and figured only in the seventh paragraph. Given the attention span of most readers tends to be less than that of a butterfly, it is a safe bet that few saw this.

Australian journalists are a polarised lot, with some backing the left-of-centre parties and other tilting to the right. Balance is something that is totally missing. Coorey, thus, is not in some minority; he is very much part of the majority.

More in this category: « Whatever happened to the government's ransomware action plan? Murdoch, Zuckerberg, Bezos, Brin, Page are all A-okay. But Musk??? »
Share News tips for the iTWire Journalists? Your tip will be anonymous