A bid to keep LUGs relevant

There was a time when Linux user groups were the source of support for those who install and run the free operating system. Installfests were held at least once a year and people who were interested in testing out GNU/Linux waited for these events.


While LUG mailing lists still serve as a discussion channel, GNU/Linux has now become so much a part of mainstream computing and so easy to install, that a lot of the mystery surrounding it has disappeared.

Hence the question of the relevancy of LUGs does come up for discussion at least occasionally. It's something the president of the Perth Linux User Group, James Bromberger, has been thinking about.

"For a LUG to survive, it needs energy from the members. There's a lot to talk about on this subject," Bromberger told iTWire. "Linux is mainstream these days compared with 10 years ago, and access to remote resources is trivial. LUGs used to be the only lifeline that people had to share ideas, but as an enabling technology, the internet has shifted people's reliance on local resources."

From being solely a technical resource, Bromberger says LUGs have to morph into social gatherings of like-minded people, "where there's less reliance on handing CDs around as there was 10, 15, 20 years ago, when bandwidth was much more limited (though sharing Free CDs/DVDs/BDs is still important to some - such as those without high-speed connectivity)."

Despite being a smaller group than some of its counterparts in the rest of Australia, PLUG has the distinction of hosting the Australian national Linux conference back in 2003 and also pioneering the idea of inviting Linus Torvalds to attend. 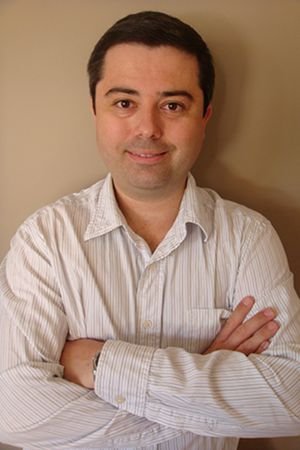 Bromberger (left) has just returned to Perth after working in the UK for a few years and found that PLUG in need of a bit of a revival. "I found that PLUG was reasonably quiet; a handful of people would turn up to the one event that was still scheduled - PLUG's monthly presentation - despite still having over 300 people subscribed to the mailing list. Looking back over the period I was absent for there had been many interesting and popular talks - many of which I wish I had been able to attend. But between August and December last year, attendee numbers were low."

The hosting of LCA in 2003 energised the group but the adrenalin has now seeped away to some extent. "I'm hoping to revive PLUG, to bring back the local community to collaborate and share ideas - or simply to share a drink and a laugh," Bromberger says.

The UK GNU/Linux community is very active and Bromberger wants to see a similar level of activity in Perth. "I would attend meetings for the two LUGs that cover the London area with up to 50 people turning up just to share a drink and a chat. At the same time, the London Perl developers (London.pm) would also fill venues with talks from prominent developers. As London is a modern cross-roads for travellers globally, it was common to have interesting people suddenly drop in and appear at any of these meetings. But the mainstay of all of this was an active local community to pull this together."
The PLUG website was updated just before Bromberger returned to Australia. The last president, Tim White, undertook a major revamp to provide more relevant and timely information.

"With PLUG we've started a few initiatives to revive the local community," Bromberger says. "We've started a bi-monthly pub social meet. Choosing venues is hard:
everywhere is inconvenient to some demographic but central Perth is central for everyone, so we're probably going to try a variety of central Perth establishments. This month (March 28) we're at The Moon & Six Pence in the city as they have a large area we can use for the Quiz Night.

Bromberger has also started a project with PLUG to stream meetings live online at some stage in the future, to keep those who cannot attend in touch with what is going on.

"The project is to use Open Source software to produce the video streams using commodity off-the-shelf video hardware - much the same as has been done at the
recent linux.conf.au in Brisbane, using the DVSwitch suite of tools. We have some members who make a 400-km round trip (from Collie) to attend some of our meetings, and there are people much further afield in WA."

But hands-on help is not being neglected. "PLUG will shortly be announcing a workshop day where people can bring their PCs along to have someone help with issues they've been having. We've not nailed down a date for this yet, but it will be on the PLUG calendar (on the PLUG website) as soon as we know.

Bromberger is hopeful that PLUG will participate in this year's Software Freedom Day which is being held on September 17. He is also looking at means to fly in potentially interesting speakers.

About 50 people have joined the PLUG mailing list since his return. "I'm personally conscious of the changing demographic of the Open Source community," he says. "Ten years ago I and many people I know were 20-something programmer/sys-admin (types), keen to poke fun at the incumbent technologies as being closed, limited, and slow. Now the open, dynamic and fast technologies are mainstream.

"I am now married, with a one-year-old son, Oskar, and from the survey of members I've started, this 'maturing' is pretty common (well, I use the word maturing in
quotes because, if you ask my wife, I apparently have some way to go.... ). We're no longer as radical and young as we were, and perhaps the LUG that used to be a beer-and-pizza hideaway now needs to adapt to an ageing membership.

"There are still bright people fresh out of school and uni who have radical ideas around Open Source, Freedom (big F), collaboration, and global instant connectivity, but they're no longer as alone with those ideas as what the community was 10 years ago."

The quiz night is the next event on PLUG's calendar. "We've themed this around the Linux and Open Source Community; some questions will be on Open Source in Australia, some will be general IT history, some will be specific Linux kernel history. It's all major bullet points that anyone who's been paying any attention to Open Source would know about," Bromberger says.

"We may have some general knowledge questions as well; I've been somewhat fascinated by the years of QI that I've been exposed to so perhaps (there may be) a slight influence from that if I can do so. It's not a professional quiz; we're not selling tickets, we don't have a professional MC - it's just me with some fun pictures and questions for people to take a stab at!"
Read 4790 times