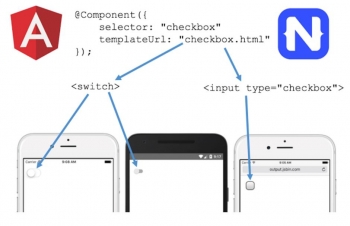 BEDFORD, Mass.—May 4, 2016—Progress (NASDAQ: PRGS) announced the latest release of NativeScript®, the open source framework from Telerik, a Progress company, enabling developers to use JavaScript to build native mobile apps running on all major mobile platforms. With the release of the NativeScript 2.0 solution, Angular developers can now write native mobile applications for iOS and Android using Google’s Angular 2 JavaScript framework, delivering high-performing, native mobile applications with maximum skill and code reuse. The announcement was made during a keynote presentation at ng-Conf in Salt Lake City, Utah.

AngularJS is one of the most popular open source JavaScript frameworks for application development, and its latest version, Angular 2 RC, makes it possible to use Angular outside of a web browser. The newly announced NativeScript integrations with Angular 2 reduce the cost of building mobile applications by enabling developers to reuse existing skills and code from the web to build their mobile applications. By eliminating the need to recruit and staff a variety of mobile experts in languages for a specific platform or for a special purpose, the NativeScript and Angular solutions integration significantly decreases the learning curve and ramp-up time for Angular developers to build native mobile apps.

Developed and supported by Progress, the NativeScript solution is unlike traditional hybrid or web apps; it produces native apps, using platform-native UI to deliver maximum performance—even on older Android devices—while still making it easy to share code and skills between the web and different platforms. Together, the NativeScript and Angular solutions offer a powerful one-two punch for developers looking to deliver the best web and mobile experiences using shared code and skills. In addition, reusing skills by writing native apps with JavaScript, and using Angular 2 in the NativeScript framework opens the door to sharing code between web and native apps.

For more details about the latest release of the NativeScript framework, Progress is running a webinar “NativeScript and Angular 2: Change the Mobile Game,” on May 17th, at 11:00am U.S. Eastern time, 8:00am Pacific Time.

More in this category: « Demand for open source skills increasing: survey ZFS to be offered by Debian »
Share News tips for the iTWire Journalists? Your tip will be anonymous