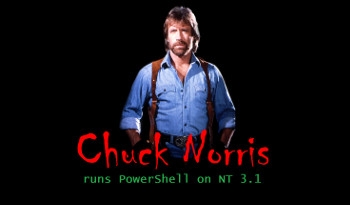 Microsoft has announced that Windows PowerShell will be released as an open source program and has built an binary alpha version that will run on some Linux distributions and OS X.

PowerShell is a task-based command-line shell and scripting language built on the .NET Framework. Linux and other UNIX-like operating systems have long had scripting available through different command-line interfaces.

This is the third big move by Microsoft in making its software available on Linux. SQL Server was announced some time back and then the core of the .NET framework was open-sourced.

The alpha binary will run on Red Hat, CentOS and Ubuntu and Mac OS X.

In a post on the Microsoft Azure blog, Jeffrey Snover, technical fellow from the Microsoft Enterprise Cloud Group, said the initial release would be community supported but down the line an official Microsoft released version of PowerShell, based on open source, would be released to anyone running a supported version of Windows or UNIX.

"The timing of the official Microsoft version will be based upon community input and business needs," he added.

Asked for his reaction to the Microsoft move on PowerShell, Debian developer and sysadmin Russell Coker said he was sure that some people in the Linux community would be opposed to it.

"But I think that all free software is good," he said. "If the software is available under a suitable licence so that anyone can use it and modify it without legal risk — i.e. no potential claims that they infringe copyright by working on other shells after reading PowerShell code — then that's a good thing.

"If some Linux users find that PowerShell suits their needs better than Perl or bash programs that's great too."

Veteran FreeBSD developer Marshall Kirk McKusick said he had been very pleased with "the recent pivot of Microsoft to first accept the use/importance of open-source software by their customers and now to fully embrace it and join its ranks".

"The article you cite shows this transformation on many levels. They understand that to get community involvement they cannot just throw the source up on some internal website. Rather they have to put it up on github, monitor and manage mailing lists, and be responsive to pull requests," he said.

McKusick pointed out that Microsoft had certainly been supportive of FreeBSD. "They helped folks on the project write and tune the Hyper-V drivers needed to make FreeBSD work well on Azure. They also helped get FreeBSD available as one of the virtual-machine options on Azure. They even provided a testimonial about FreeBSD."

"One word? Indifferent," was the reaction of senior UNIX sysadmin Craig Sanders, when asked for a reaction to the Microsoft move.

"More words: I don't care much one way or another. I guess it'll be useful for those who want to use it and not for those that don't. PowerShell has some advantages (like piping objects and structured data between programs) in its native environment (Windows), but I'm not sure how that'll translate to Linux - my guess is that the cool object piping will only work with Mono apps, so it'll probably be useful for Mono devs and users."

Sanders, who has been a developer with the Debian GNU/Linux project for many years, added: "I'll probably get around to looking at PowerShell on Linux one of these years, but I doubt if PowerShell will add anything of any use to me.

"I'll keep using sh or Bash for scripting. Or Perl or Python for tasks beyond what Bash is good for - Bash has array support, even associative arrays now, but if you need to do any serious data processing you still need to use Awk or Perl or Python or something."

More in this category: « Linux developer loses GPL suit against VMware No highs, no lows: Linus Torvalds on 25 years of Linux »
Share News tips for the iTWire Journalists? Your tip will be anonymous