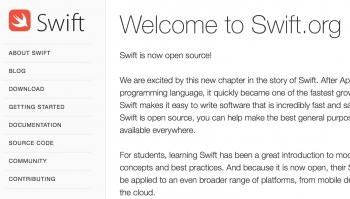 Apple has released its Swift programming language as open source, as promised earlier this year, with developer contributions to help make Swift ‘even better and available on more platforms’

Apple has announced its Swift programming language is now open source. As an open source language, Apple hopes and expects that ‘the broad community of talented developers — from app developers to educational institutions to enterprises — can contribute to new Swift features and optimisations and help bring Swift to new computing platforms.’

Swift was introduced in 2014, and Apple says it is now ‘the fastest growing programming language in history and combines the performance and efficiency of compiled languages with the simplicity and interactivity of popular scripting languages,’ with this statement based on ‘RedMonk Programming Language Rankings, June 2015.’

Apple also announced the launching of the swift.org website which the company says has plenty of ‘detailed information about Swift open source, including technical documentation, community resources and links to download the Swift source code.’

Craig Federighi, Apple’s Senior VP of Software Engineering said: “By making Swift open source the entire developer community can contribute to the programming language and help bring it to even more platforms.

“Swift’s power and ease of use will inspire a new generation to get into coding, and with today’s announcement they’ll be able to take their ideas anywhere, from mobile devices to the cloud.”

Apple explains that Swift is ‘a powerful and intuitive programming language that gives developers the freedom and capabilities they need to create the next generation of cutting-edge software.’

Dubbed as ‘easy to learn and use, even if you’ve never coded before,’ Apple says ‘it's the first systems programming language that is as expressive and enjoyable as a scripting language.’

Apple also explains that as Swift was ‘designed for safety,’ it also ‘eliminates entire categories of common programming errors.’

Apple has made the Swift open source code available via GitHub and says that it ‘includes support for all Apple software platforms — iOS, OS X, watchOS and tvOS — as well as for Linux.’

Components available include the Swift compiler, debugger, standard library, foundation libraries, package manager and REPL. Swift is licensed under the popular Apache 2.0 open source license with a runtime library exception, enabling users to easily incorporate Swift into their own software and port the language to new platforms.

More details below, please read on!

The Swift.org website’s intro text is as follows:

“We are excited by this new chapter in the story of Swift. After Apple unveiled the Swift programming language, it quickly became one of the fastest growing languages in history. Swift makes it easy to write software that is incredibly fast and safe by design. Now that Swift is open source, you can help make the best general purpose programming language available everywhere.

“For students, learning Swift has been a great introduction to modern programming concepts and best practices. And because it is now open, their Swift skills will be able to be applied to an even broader range of platforms, from mobile devices to the desktop to the cloud.

“Welcome to the Swift community. Together we are working to build a better programming language for everyone.”

Ars Technica has a deeper dive into Swift, talking with Craig Federighi who ‘talks open source Swift and what’s coming in Swift 3.0’.

More in this category: « Linux Australia suffers another data leak Software Freedom Conservancy issues appeal for donations »
Share News tips for the iTWire Journalists? Your tip will be anonymous