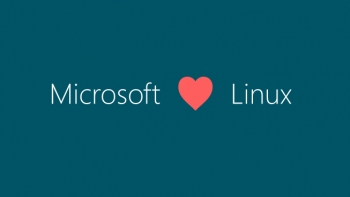 Microsoft has joined the Linux Foundation as a platinum member, the head of the foundation, Jim Zemlin, announced on Wednesday at the company's Connect(); developer event in New York.

From 2011 onwards, the foundation chief said, Microsoft had been making contributions to open source projects, with one of the first being device driver code so that Linux could be run as a guest on its virtualisation platform Hyper-V.

"Microsoft has an engineering team dedicated to Linux kernel work, and since that initial contribution, the team has contributed improvements and new features to the driver code for Hyper-V on a consistent basis," Zemlin said.

He said over the past two years this engineering team had expanded the number of kernel areas on which it was working, providing code that was not specifically related to its own products. 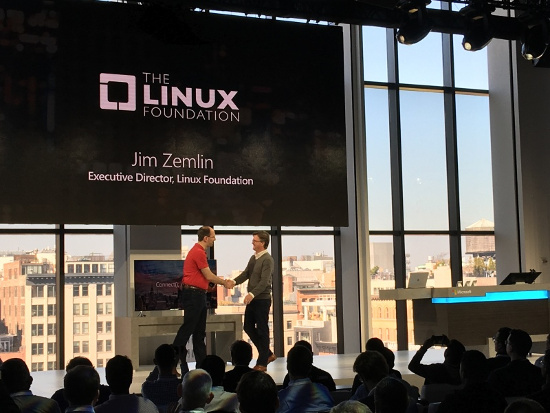 Microsoft's Scott Guthrie, executive vice-president of the company's cloud and enterprise group, and Jim Zemlin on stage at the Connect(); developer event in New York. Photo: courtesy the Linux Foundation

"In addition, a year ago we worked with Microsoft to release a Linux certification, Microsoft Certified Solutions Associate Linux on Azure."

He pointed to other areas in which Microsoft had made contributions to open source: it had open sourced the .NET Core, contributed OpenJDK, announced Docker support in Windows Server, announced SQL on Linux, added the ability to run native Bash on Ubuntu on Windows, worked with FreeBSD to release an image for Azure, and open sourced Xamarin’s software development kit and PowerShell.

More in this category: « University of Nottingham Malaysia campus gets a pro Bro with Ruckus Crowd-funding sought for first Linux tablet »
Share News tips for the iTWire Journalists? Your tip will be anonymous