KDE chalks up another year with cash to back community 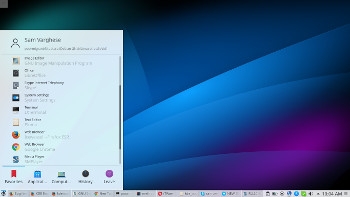 The KDE Project, a group that puts out a desktop environment that is used by numerous GNU/Linux distributions, has received two big donations that will enable it to do more to support the community, according to the president of the project, Lydia Pintscher.

In a Twitter thread to mark the 22nd birthday of the project — which came to life on 14 October 1996 — Pintscher said over the past year the project had rallied behind the three goals that it cared about: privacy, onboarding and usability and productivity.

KDE was started by German software developer Matthias Ettrich with the aim of providing GNU/Linux users with all the functionality that Windows had at the time.

In an email to invite participation in the project, Ettrich wrote: "The idea is NOT to create a GUI for the complete UNIX-system or the System-Administrator. For that purpose the UNIX-CLI with thousands of tools and scripting languages is much better. The idea is to create a GUI for an ENDUSER. Somebody who wants to browse the Web with Linux, write some letters and play some nice games."

Pintscher said over the past year, the project had also succeeded in greatly improving public perceptions of KDE.

Im one of the lucky ones who saw KDE from the beginning since I was at the very start of #Linus work there, when an aplha kernel had to be compiled on a #386DX computer, took a whole week to compile, and you needed dd and rawwrite.exe to create a boot floppy to get the OS started

"Today is [KDE's] 22nd birthday," she said. "On the one hand this means we are among the oldest free software projects there are." Among free and open source software projects, only the Linux kernel project has more developers.

"But at the same time so much has happened over the last year that it feels like the very best is yet to come. I'm really proud of what we have achieved."

The project's mobile version, Plasma Mobile, is being used by the San Francisco-based computer manufacturer Purism which aims to produce the world's first free smartphone, the Librem 5, by April next year.

KDE can also be run on Windows and has a separate installer for doing so. The project also sells a dedicated laptop that is customised to run KDE.

More in this category: « Debian dev forks Redis modules that are under Commons Clause licence Microsoft releases OS source code on GitHub »
Share News tips for the iTWire Journalists? Your tip will be anonymous