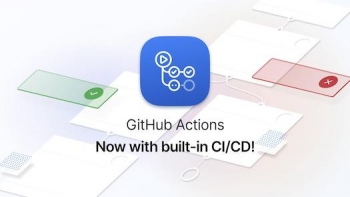 GitHub Actions was the major announcement from the company’s annual GitHub Universe event in October last year, describing it as the biggest innovation to hit GitHub since the addition of the pull request in 2010.

GitHub Actions provided the site’s 40 million users with shareable workflows to automate and take away effort involved in architectural considerations. Developers could, for example, make a workflow that triggered on a new code release, automatically publishing the changes to AWS, Google Cloud, Azure, Heroku and Zeit all in parallel.

GitHub states it received a “phenomenal” response from developers who have created thousands of workflows in the 10 months since Actions was launched. However, one thing was noticeably missing, namely support to automate continuous integration and continuous delivery - aka the CI/CD pipeline - and it is this very thing GItHub has now announced.

The CI/CD support caters for any platform including Linux, macOS and Windows, any language and any cloud. As well as fast CI/CD itself GitHub Actions also now provides matrix builds - letting you test multiple versions of your project in parallel, live logs, the ability to write and reuse actions and workflows like code, and the automation of workflows on any event.

Right now, these new features are in beta. Actions will be made generally available at GitHub Universe on November 13th. Actions support for GitHub Enterprise Server will come in 2020. GitHub Actions will be free for public repositories, and pay-as-you-go for private repositories. It is free for everyone during the beta.

Australia and the Asia Pacific region were especially noted by Sam Hunt, GitHub Vice President APAC, as having helped shape the product: “It is great to see how the community of developers and customers in APAC is both being addressed and heard extremely well by GitHub as a global organisation. Incidentally, one of the Actions engineers worked in the region for a few months running workshops and listening to the feedback from developers and customers, and GitHub Actions is a great example of how that has impacted the product, which we are excited to announce today.”

Hunt also commented, “GitHub Actions are code, and these can be forked just like code. What it means for users is that when you share code, you can also share the delivery, test and deployment functions that you built alongside it. This is really important because it helps developers reduce mundane tasks, allowing them to focus on what is core to their business and projects. It’s great to see CI/CD capabilities come together with this new iteration of GitHub Actions, and it is definitely a strong move forward for what we expect to see out of CI/CD in the future.”

“Live logs providing real-time feedback streamed into the Actions console really elevate the importance of the CI/CD process into the code. Also, developers love emojis, they can mean an entire sentence to a developer and can speed up the visual intake of information,” Hunt said.

You can watch the launch announcement at GitHub’s live stream site.

More in this category: « SAP official Di Donato to be next CEO of SUSE MariaDB opens US headquarters in California »
back to top