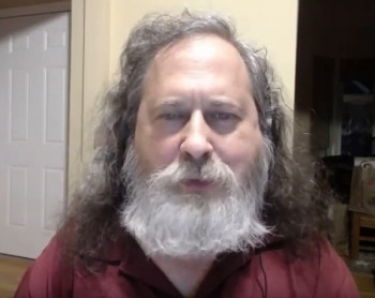 Richard Stallman: "Later in life, I discovered that some people had negative reactions to my behaviour, which I did not even know about." Courtesy YouTube

The Free Software Foundation has doubled down on its support for its founder, Richard Stallman, issuing a statement on Monday backing his reinstatement to the board.

Curiously, the statement was published a minute after Stallman issued his own statement about the furore over his move back to the board on on 19 March, which he announced during the organisation's annual LibrePlanet conference.

He had stepped down from the FSF in 2019, following remarks he made about the victims of the late Jeffrey Epstein, an American financier and convicted sex offender.

The board said it had voted to bring back Stallman "after several months of thorough discussion and thoughtful deliberation".

"We decided to bring RMS back because we missed his wisdom. His historical, legal and technical acumen on free software is unrivaled," it said.

"He has a deep sensitivity to the ways that technologies can contribute to both the enhancement and the diminution of basic human rights. His global network of connections is invaluable. He remains the most articulate philosopher and an unquestionably dedicated advocate of freedom in computing."

Stallman's decision to return to the board has not gone down well with the free and open source software community, with a push to oust him beginning five days after he announced his return.

The push came through an open letter, which currently has the support of 61 organisations and 3012 individuals, apart from its 16 main signatories. Seventeen organisations have published their own statements, all calling for Stallman to go.

Supporters of Stallman have put up their own letter calling for him to stay on the board. As of this writing, there are a total of 6261 signatories.

The FSF feels *great* about bringing back Richard Stallman. They think the problem is how they communicated it.

The Free Software Foundation cannot be redeemed. It is all done. We are now in a post-FSF world, and I think that will soon prove to be for the best. https://t.co/d4fKCqIxzI

The FSF board statement said: "RMS [Stallman] acknowledges that he has made mistakes. He has sincere regrets, especially at how anger toward him personally has negatively impacted the reputation and mission of FSF. While his personal style remains troubling for some, a majority of the board feel his behaviour has moderated and believe that his thinking strengthens the work of the FSF in pursuit of its mission.

"We take full responsibility for how badly we handled the news of his election to a board seat. We had planned a flow of information that was not executed in a timely manner or delivered in the proper sequence.

"FSF staff should have been informed and consulted first. The announcement by RMS at LibrePlanet was a complete surprise to staff, all those who worked so hard to organise a great event, to LibrePlanet speakers and to the exhibitors. We had hoped for a more inclusive and thoughtful process and we apologise that this did not occur."

Ignore the haters. You've done the right thing. I'm very happy that you're now publicly defending Richard Stallman, and I can rest easy knowing that his position is safe.

I sincerely hope all of us can move past the bitter, hateful politics of recent weeks.

In his own statement, Stallman said since he was a teenager, he had often felt "as if there were a filmy curtain separating me from other people my age".

"I understood the words of their conversations, but I could not grasp why they said what they did. Much later, I realised that I didn't understand the subtle cues that other people were responding to."

And he added: "Later in life, I discovered that some people had negative reactions to my behaviour, which I did not even know about. Tending to be direct and honest with my thoughts, I sometimes made others uncomfortable or even offended them – especially women.

"This was not a choice: I didn't understand the problem enough to know which choices there were.

"Sometimes I lost my temper because I didn't have the social skills to avoid it. Some people could cope with this; others were hurt. I apologise to each of them. Please direct your criticism at me, not at the Free Software Foundation."

The biggest FOSS community project, Debian GNU/Linux, is in the process of voting on a general resolution on what it should do about Stallman, with the results due on 17 April.

Well-known security practitioner Katie Moussouris, the chief executive and founder of Luta Security, was one of the first to call out Stallman, on 30 March.

More in this category: « Work to make Linux run on M1 still in early days, says Torvalds Rust support in Linux may be possible by 5.14 release: Torvalds »
Share News tips for the iTWire Journalists? Your tip will be anonymous