Why Microsoft is porting SQL Server to Linux Featured 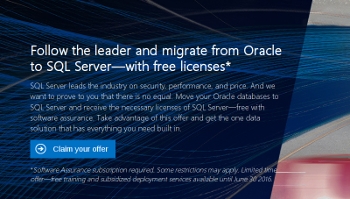 When Microsoft announced a little over a week ago that it would be porting SQL Server to Linux by the middle of next year, it came as something of a surprise.

Many people saw this as one more move that Microsoft just had to make. After all, given the ubiquitous nature of Linux, every software company has to adapt to work with it, or else forget about targeting certain parts of the enterprise market.

But the real reason for Microsoft's move has now become apparent. It is trying to target Oracle customers and woo them over.

Thus far, Microsoft could only woo Oracle customers who run their systems on Windows.

Microsoft is now offering free lifetime SQL Server licences to those who migrate from Oracle to its database. Some conditions are attached: "Software Assurance subscription required. Some restrictions may apply. Limited time offer—free training and subsidised deployment services available until June 30 2016."

A little less than a decade ago, Oracle announced its own Linux under the name Unbreakable Linux. This was nothing more than Red Hat's enterprise distribution with the trademarks, the only proprietary bits, removed. Nothing wrong with that, it's kosher under the licence which applies to RHEL.

After this, Oracle could offer its product on its own Linux too. It could undercut Linux companies on cost as its operations are much bigger than theirs. And it could offer what Microsoft could not – a database for the enterprise running on Linux.

There is a historical animosity between Larry Ellison, the chief of Oracle, and Bill Gates, a co-founder of Microsoft, and that seems to also still permeate the corridors at Redmond.

Microsoft can now hold out the promise to anyone who migrates: in a short time, you will be able to run SQL Server on Linux too. And there is much to be gained in terms of money.

Further, given Oracle's somewhat spotty record on security, even Microsoft can claim to offer better support and quicker patches when problems arise. Strange indeed, but true.

More in this category: « Could Novell have become a Linux player? It is indeed sad that so many people have to run Windows »
Share News tips for the iTWire Journalists? Your tip will be anonymous