Why Google should never be given Protected cloud status by ASD 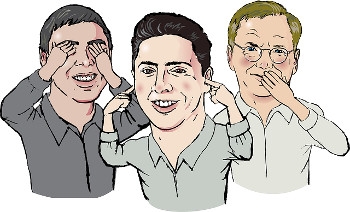 Despite being exposed as the king of snoopers, Google is now trying to obtain certification from the Australian Signals Directorate to handle Australian Government data that has the highest security classification.

There is one reason: this involves big money. And that is something Google loves.

Yesterday, I mentioned the word chutzpah in connection with Google. It's clear that this is one attribute the company possesses in spades.

Rarely do any personnel from the company speak directly to the media. When they do so, there is always a vested interest. Today, Colin Timm, the A/NZ country director for Google's cloud division, went on the record to push the company's case for Protected status.

There are now five cloud providers who have this status: Dimension Data, Vault Systems, Sliced Tech, Macquarie Government and Microsoft. There were some eyebrows raised when Microsoft was granted the certification last month, because of the additional fiats that were attached to its being certified.

But at least Microsoft's main business is not advertising; while it does collect data from its customers, this is not for targeting of advertisements and spying on people. Google's main business is just that: snooping on world+dog, picking up every detail possible and then using it to target people with various services.

Recently, Google was exposed as snooping on Australian mobile customers who use devices that run its Android operating system – even when they have no SIMs in those devices. In fact, Google was using the consumers' own data – for which they pay - to the tune of multiple millions of dollars.

The company is yet to provide an explanation for this egregious behaviour. In the light of this, the fact that the Australian Government is even considering giving Protected cloud status to such a company is mind-boggling.

Google's business model, like Facebook's, requires it to snoop on people and collect their data. This is then used for targeted advertising and is the reason a huge proportion of online advertising revenue goes to the company.

It has been caught time and again violating people's privacy but has always earned only a rap on the wrist. No doubt, the company will exert political pressure to try and get Protected status; the company is well connected in Washington and during the eight years of Barack Obama's presidency numerous ex-staff made their way into government sinecures.

Australia has a reputation for bowing to US pressure: during negotiations for the US-Australia free trade deal, Canberra agreed to lower some of its quarantine requirements. It even agreed to give the Americans some concessions with the Pharmaceutical Benefit Scheme.

Thus, it remains to be seen whose interests the ASD will serve: Australia or the US.

Google and other big multinational technology companies are also under pressure over alleged tax evasion, with the European Commission, the executive arm of the EU, recently unveiling a proposal to tax these companies at a rate of 3% as an interim measure.

And this is the company that the ASD wants to trust with top secret Australian Government data? Pull the other one, please.

More in this category: « Google must be hit with billion-dollar fine for snooping on Aussies Fairfax journos expect companies to be as pure as the driven snow »
Share News tips for the iTWire Journalists? Your tip will be anonymous