The NBN is done. Now the NBN needs to be redone 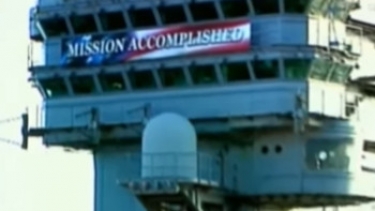 The Mission Accomplished banner that was on the ship where George W. Bush announced that the US had won the war with Iraq. That was May 2003 and American troops are still in Baghdad. Courtesy YouTube

Barring a major catastrophe, the Coalition Government will be able to announce within a fortnight or so that it has completed the rollout of the national broadband network and met its target. One can only hope that, at the same time, there will be an announcement about how the network will be upgraded.

Any announcement will be akin to the declaration by George W. Bush in May 2003 that the invasion of Iraq he had launched two months earlier was a success; a "Mission Accomplished" banner flew above him that day.

But 17 years later, the Americans are still in Iraq, the country has not known a day of peace since the March 2003 invasion, and there is no end in sight to the political problems plaguing Baghdad.

One hopes that the NBN story will be less tragic. After a grandiose beginning, with a plan to provide 93% of the country with fibre to premises and the remainder with either fixed wireless or satellite connections, what has eventuated is a much more mixed and sorry mess.

The story of the NBN is well-known and I do not intend to dig up old bones. But one fact should be noted: people are prone to blame the Coalition Government for all the NBN's woes. Many fail to remember that Labor luminaries Kevin Rudd and Stephen Conroy were the pair who decided, in true neoliberal style, to keep the NBN's costs off-budget.

Instead they designed it as a project which would reclaim its own costs. It was not thought of as a public utility — like water, gas and electricity — but rather as a means to make a buck.

Whatever foresight this pair can claim for the project, the fact is they failed to understand that by 2009, the Internet was a utility. We have seen during the lockdown imposed by the pandemic how useful even an undercooked broadband network can be.

One thing that has become increasingly clear over the last year or so is that the government will not spend any more money to upgrade the network more than the $51 billion that is expected to be the final bill. What happens next?

The NBN was meant to be used by everyone, but if it is not fit for purpose, then others will come in and provide services. And as more companies start offering alternatives, the chances of the NBN Co, the company that built the network, making a profit will recede further and further. The company is already awash in red ink.

Optus has started offering 5G home connections at what seems like a reasonable $70 per month, with a minimum subscription of 24 months. With 165Mbps promised during peak hours, it seems attractive. And anyone on an FttN connection — some providers have stopped offering 100Mbps plans to such premises — would find it doubly attractive.

Doubtless as the year wears on, the other two big players — Telstra and TPG-Vodafone — will also look at offering broadband using 5G.

Other companies are making moves too. Aussie Broadband has started rolling out its own fibre, and when that is complete, it will have a better product to push. More companies are expected to join the fray to capitalise on the hunger for genuine broadband.

The chances of a private company buying the NBN are slim. This is partly because the value of the network is not close to anything like the $51 billion spent on it. It is worth closer to $35 billion.

It makes sense for Telstra to buy the network as it would be the only company that will not have to pay $1 billion for the privilege of using its infrastructure – this is a cross around NBN Co's neck. The government has made it clear that a sale to Telstra will only be allowed if the company splits into retail and wholesale businesses as happened in New Zealand.

After 11 years, Australia has another dud on its hands. The politicians can boast as much as they like, before they move on to the next disaster. Which I suspect will be whatever solution is planned to counter climate change. I doubt I'll be around to vent about that.

More in this category: « Twitter deletes accounts partly based on defence lobby group ASPI's word Threat to Windows and Linux cannot be really put in the same basket »
Share News tips for the iTWire Journalists? Your tip will be anonymous