Microsoft revival only if Gates and Ballmer leave Featured 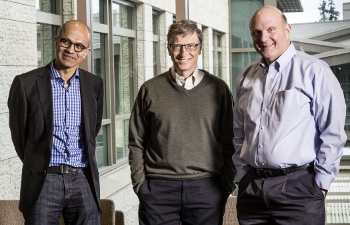 A fortnight ago, it is fair to say, few of us among the masses had heard of Satya Nadella. But now it is different: the man has accepted the poisoned chalice that the job of Microsoft chief executive has become and he will be front and centre at Redmond at least for a few years.

Microsoft is still a very important technology company, if only for the reason that were it to fail tomorrow, billions of desktop users would have to switch. The resultant costs to their respective selves and companies would put a lot of people out of business. The glory days are behind it, but software from Microsoft is still like the common cold or the mosquito - ubiquitous.

Given the number of Indians who have been brought across to work at Redmond - in the 1980s Microsoft even got into trouble with the Indian government for bringing across nearly every graduate to work in Redmond - there was a high degree of probability that one would rise to the top.

Apart from all the accolades which will flow Nadella's way initially, one can expect a great deal of pride in India about one of its citizens ascending to such a position. Few, however, will question why the man left his country and did not try to attain prominence in his own backyard; no, that would result in a lot of unpleasant facts about India being aired and Indians, for the most part, are very sensitive when their fractious land is criticised.

But I digress. What is relevant at this time is whether Nadella will be able to make Microsoft, the company, a force in the consumer markets in which it has, so far, struggled. To be frank, the portents are not good.

There are two reasons why Nadella (seen above with Bill Gates and Steve Ballmer) will find it difficult to guide the ship. One is bald, ebullient and named Steve Ballmer. The other still has hair, a whiny voice, and is named Bill Gates.

Given the fact that Gates co-founded the company and Ballmer has been there practically from day two, it will be extremely difficult for Nadella to take any decision without first thinking: "What would Bill say? What would Steve say?" The shadows of these two men will hang over Microsoft; 13 years of Ballmer as CEO have done little good for the company and whatever years he continues to spend on the board will not do any good either. Gates seems to be unable to cut the umbilical cord that ties him to Microsoft, despite all the public utterances that he is now only focused on his foundation and its alleged philanthropic activities.

Not that one should be really overwhelmed by what Ballmer has done. No CEO of a tech company in living memory has ever presided over two disasters like Windows Vista and Windows 8. The entire Windows roadmap was thrown completely out of gear and now we have versions of the operating system coming out of our ears and competing with each other. It wasn't meant to be this way.

But Vista was still-born and Windows 7 had to be rushed out. Windows 8 came out in late 2012 and it did not go down well, though it was not half as bad as Vista. But it is enough of a disaster for at least one big company, HP, to start offering Windows 7 on its hardware instead of Windows 8. And now there is talk of Windows 9 - while it is only over the past year that corporates have started to look at moving to Windows 7. XP, the 13-year-old veteran, is still preferred as it is a known devil.

If the Microsoft board was serious about giving the company a chance to move in a fresh direction - indeed, any direction which the new CEO decides to take it - then both Gates and Ballmer should have quit. Now they will continue to be a millstone around the new CEO's neck. It will be impossible for him to be his own man.

One of the main problems - indeed, the major problem - at Microsoft is the number of chiefs. There are managers managing managers managing managers - who manage still more managers. There is a bureaucracy that would make Egypt proud - and that is saying a lot. India, which inherited and perfected the British bureaucratic system so as to ensure total paralysis in many government departments, would be hard put to match Microsoft's inertia.

But Nadella will not have a free hand to rectify that problem. There will be those among the managerial cadres who have connections to Ballmer. And Gates' favourites will be there too. It will be impossible to sort the sheep from the goats. So there will be ugly compromises and pretences at progress. Numerous sinecures will be created in a bid to move particularly painful managers out of the way. A lot of Nadella's energy will be wasted on these internal politics.

Money-wise Nadella comes in at a time when the company has recorded good earnings. But the latest figures  are, to be true, not exactly encouraging. Profits were up, but not in the right places. Surface tablets earned $US893 million - but at a cost of $US932 million. No sales numbers were given but Apple is expected to announce it sold 20 million iPads in the same quarter and that's a figure that Microsoft cannot even begin to dream about.

Windows OEM sales fell, something attributed to the drop in the number of PCs sold worldwide. Sales of Office are down as people switch to the subscription model of Office Home 365. Both these products have been the cash cows for as long as they have been around.

Additionally, Nokia's mobile phone business, which Microsoft is in the process of acquiring, did very poorly. On the plus side, XBox sales did well. But even that has a downside - Sony has grabbed the number one spot in that niche with its new PS4.

New brooms sweep well. Given that, there will initially be a great deal of hope, a flurry of activity, and much jaw as Nadella begins his term. But essentially, it is likely to be all a case of dancing on the same spot.

More in this category: « Who thinks five-month-old stats are news? The IEEE, for one Debian init system vote has become a farce »
Share News tips for the iTWire Journalists? Your tip will be anonymous