LCA 2010: Tridge and the art of education

0
Shares
By Sam Varghese
It takes a lot of courage to set out on an unexplored course, especially when it comes to academia. There is nothing to compare with the withering scorn that one earns from this community if one sets out on an ambitious course - and then fails miserably.


But free software luminary Andrew Tridgell is used to exploring uncharted waters. Along with Bob Edwards, a professor at the school of computer science at the Australian National University in Canberra, Tridgell taught a course in development of free and open source software at the ANU last year, a notable first.

The university, a hallowed institution of learning in Australia, was happy to open its doors to Tridgell who was given leave by his employer, IBM, to run the course along with Edwards.

The ANU was also extremely accommodating in changing the terms of the agreements so that the principles of FOSS could be followed in toto. 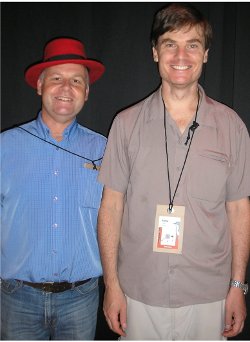 Yesterday, at the 11th Australian national Linux conference, both Tridgell (seen on the right of the pic) and Edwards (on the left) reported that their experiment had been a resounding success.

There is no authorised textbook for such a course, no furrowed path to follow. Yet for someone like Tridgell, who is known to have an open and curious mind - that's the only way one can account for software like Samba and rsync which he has fathered - it was an adventure that had to be experienced.

He told the conference yesterday that the course was not about programming or how to use Linux.

"It was about teaching students about the FOSS culture," Tridgell said. "FOSS development is about working with others, both on a technical and social level; learning how to submit patches, report bugs, and teaching people how to get on with other FOSS developers."

When Tridgell spoke to iTWire about the course at the LCA in Hobart last year, it was clear that it meant as much, or even more, to him as his own software projects do.

The course that Tridgell and Edwards taught was part of the Computer Science Master's programme. It was one of many that students could take and will be on offer in 2010 too.

Tridgell said there was a combination of practical and theoretical training involved. Students were asked to get involved with real FOSS projects and they were taught and encouraged to understand the FOSS community.

The course had an intensive format for five days with three lectures and two lab sessions per day. Students were given a month to prepare assignments and were offered weekend lab sessions for assignment assistance.

Tridgell said that the course would result in a textbook that would help others who had similar ambitions.

He asked the audience to raise their hands if any of them had studied FOSS during their education; not a single hand went up. "A decade from now, in 2020, if I ask the same question and I see a number of hands go up, my job would have been done," he said.

Edwards said the students were not directed towards any particular FOSS project. However, to gain a perspective of what a project could be like, they studied the Samba project - Tridgell said this was because nobody could contradict him much when he recounted the way that project has panned out since its inception.

Some students who wrote to different FOSS projects did not hear back at all, Edwards said. Others got responses and one student was accepted as a translator for a particular Indian language within a day; Tridgell said the student was thrilled to bits when his name appeared on the project website within a couple of days.

There was another case where a student wrote to a FOSS project asking for some clarifications; the lead developer happened to be in Canberra and, to the student's surprise, turned up in the classroom the next day and worked through the problems with the student.

Those wanting further details about this year's course could email student.services@cecs.anu.edu.au or call 02 6125 0677.

More in this category: « LCA 2010: Allison warns of patent traps in Mono LCA 2010: How FOSS spreads to the home »
Share News tips for the iTWire Journalists? Your tip will be anonymous