Hint to Brad Smith: getting rid of Windows will halt most cyber attacks 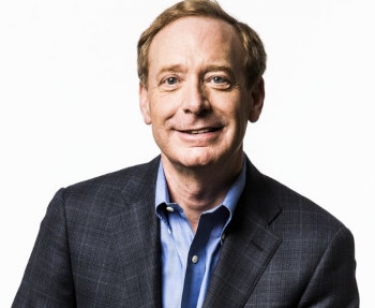 Brad Smith has the power in his hands to reduce cyber attacks across the world if he really wants to. Courtesy Microsoft

Microsoft president Brad Smith has called for the barrage of cyber attacks on democracies — not other countries which also face the same issue — to be called out and stopped.

Smith, who made the comments at the so-called Atlantic Future Forum, failed to mention that he could with one stroke get rid of the target of a majority of the attacks by jettisoning Windows from his company's portfolio.

But Smith appeared to be convinced that only the enemies of the US — today's list of evildoers is Russia, China, Iran and North Korea — were the problem.

He claimed the “hacking and weaponising” of private emails and disinformation campaigns posed the greatest threats. “I do believe it’s one of the greatest risks to the protection of our democracies today.”

Much of that weaponising is done through ransomware attacks which are carried out exclusively on Microsoft's flagship product Windows, one from which it earned US$20 billion (A$28.1 billion) in the last year, according to the company's 2019 annual report.

He made no mention of what the NSA, which has a bigger cyber budget than the next 10 countries on the list, was doing and whether it was indulging in any attacks on other countries.

Which, doubtless, are also cyber attacks. But it could be that Smith sees American attacks as good, and attacks by other countries as evil. After all, he is an American and is, no doubt, caught up in the myth of American exceptionalism.

Some of his quotes at the forum were hilarious. “We’re living in this period of time that is certainly not necessarily war but doesn’t feel entirely like peace either,” he said. “It’s this grey zone where we see these constant cyber attacks.

“Five years ago, I think we thought about this principally in terms of attacks on, say, conventional infrastructure or our military capabilities, but today I think it’s just become an onslaught on democracy itself.”

But then the emperor never likes to show that he is not wearing clothes.

More in this category: « Microsoft releases a decent Edge browser for Linux Sydney Morning Herald shows it knows nothing about encryption »
Share News tips for the iTWire Journalists? Your tip will be anonymous