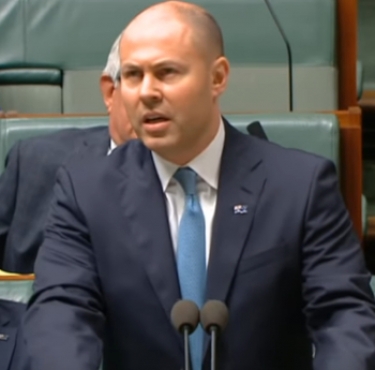 Josh Frydenberg: Lots of talk, but the end result is a dud. Courtesy YouTube

The Federal Government has blown a chance it had to implement a world-leading deal with digital giants Google and Facebook, backing down even before the bill for its so-called News Media and Digital Platforms Mandatory Bargaining Code was introduced into Parliament. The digital platforms will be breaking out the Dom Pérignon in Silicon Valley over the way they have clinically neutered Treasurer Josh Frydenberg.

One should not be surprised; this government is very good at making announcements and pumping up its own tyres. To call this law world-leading is a massive overstatement.

Frydenberg and Prime Minister Scott Morrison have been talking tough for some time, saying that the two companies would be brought to heel. Exactly how much pressure has been brought to bear on Morrison from the new man expected to occupy the White House from 20 January onwards is unknown.

But days before introducing the proposed law into Parliament, the government agreed to let the two digital behemoths get what they wanted, with Google acting as some kind of proxy for Facebook. Strange as it may seem, sometimes companies that are enemies in open society unite on a cause when they have a common enemy.

And if inquiries are made as to how these calculations were done, up will come the classic excuse: commercial-in-confidence.

The second concession given to the companies is a reduction of time for informing publishers about change in algorithms, from 28 days to 14 days. This, again, is something that Google had repeatedly whinged about.

Big American tech firms don't shy away from threatening sovereign governments; you can see the latest case right here. where Google, Facebook and Twitter have threatened Pakistan Prime Minister Imran Khan that they will pull out of the country if his government omplements new security rules. Pressure will also come from Washington, no doubt, which provides plenty of aid to Pakistan.

Frydenberg is being pumped up by the News Corporation newspapers which generally side with the government. They cannot call this deal for what it is: craven cowardice.

And remember, these three changes may not be the end of it; the bill is only being presented on Wednesday, not passed. There is plenty of time for President Joe Biden and his cohorts to give a call or two to Scotty from Marketing and make him bend over a little more in the new year. You know, special relationship, and all that.

Google has been in bed with the Democrats for a long time, being particularly thick with the Obama administration, Biden, remember, was Obama's deputy.

So it really doesn't matter what adjectives Frydenberg uses, or what is said in Parliament. This is a dud deal, something like the US-Australia free trade deal which was trumpeted as some kind of lifesaver by former Liberal prime minister John Howard. Some lifesaver, if one goes by actual figures.

The man I really feel sorry for is Rod Sims, the doughty head of the Australian Competition and Consumer Commission, who drafted the code and did as good a job as he could, only to be shafted by the politicians at the end.

But then he is on what is probably his last extension as ACCC chief and will, no doubt, be stoic about it. He really has no choice.

The whole episode reminds me of something I have cited before when writing about Samsung and its combustible Galaxy Note7: words spoken by the late Yasser Arafat soon after his Palestine Liberation Organisation was forced to leave Beirut in the 1980s.

The PLO left the Lebanese capital with its tail between its legs, but, at the very next annual meeting of all Palestinian factions, Arafat tried to paint the evacuation from Beirut as some kind of great military victory.

This led one of the more down-to-earth Palestinian faction leaders, the late George Habash, to comment that if the Palestinians had any more "victories" of the Lebanese kind, they would end up holding their next annual meeting in Fiji.

Frydenberg has just given Australia one of these pyrrhic victories.

More in this category: « Google bosses should learn how to accept defeat with grace CentOS dumping tells us Red Hat has only dollar signs in its sights »
Share News tips for the iTWire Journalists? Your tip will be anonymous