Ex-WaPO man ignores media queries. Why should others answer him? 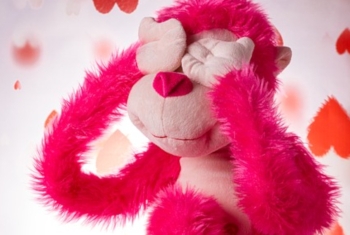 Image by Christine Sponchia from Pixabay

Former Washington Post employee Brian Krebs, who runs a blog about security, has been making a song and dance over the last few days over the fact that representatives of Wipro, an Indian outsourcing company, did not respond within three days to his inquiries about a security issue at the company.

Krebs probably forgot that he does the same thing when he is faced with media queries. Indeed, he goes to the other extreme by abusing journalists who ask him perfectly legitimate queries.

In December 2017, Krebs put up, and then quickly took down, a story (archived version here) claiming that a man with a Russian name could be the person who leaked NSA exploits to a group known as the Shadow Brokers.

Krebs mentioned the taking down of the article at the very end of a story he wrote about the arrest of a Vietnamese American who had pleaded guilty to taking masses of NSA material home. Comments were not allowed on this article, presumably to avoid criticism of his earlier claim.

He did not offer any reason why he had taken down his article, but it appears that he had allowed himself to be a willing vehicle for claims by a Washington DC-based security firm, InGuardians, about a man of Russian origin being behind the leak of exploits to the Shadow Brokers. In that article, he avoided citing his source for the claims until the 30th paragraph.

iTWire was one of two publications that questioned Krebs' claims and pointed out mistakes in the article; well-known blogger Marcy Wheeler was the first to do so in a post on her blog.

Krebs did not respond to a Twitter query for comment. When he was asked about the pulling of the article through posts on his blog, he resorted to personal slurs as seen below: 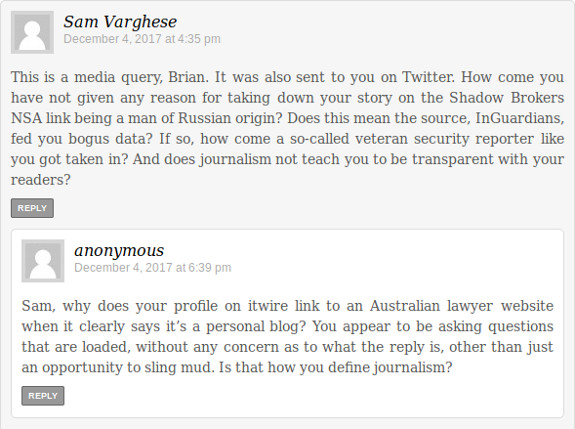 In March last year, Krebs was again contacted when he came under fire from users of a German image board pr0gramm.com after he revealed details about several admins and moderators in an article which claimed to identify who was behind the cryptocurrency mining service Coinhive. On that occasion, he stayed silent.

With the Wipro story, Krebs called up the company during an earnings call to ask questions. Presumably if it had been an American company, he would have thought twice about doing this.

More in this category: « Vodafone's Berroeta has one thing in spades: chutzpah Encryption law: tech sector waiting for someone else to bell the cat »
BACK TO HOME PAGE
back to top