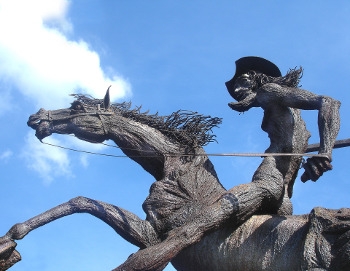 In a statement that brings to mind the valour of Don Quixote, Australian Prime Minister Malcolm Turnbull has flagged "a crackdown on ungoverned spaces online".

According to another report from The Age — similar to some of the others that one has quoted in the past — Australia plans to pressure "social media companies to do more to co-operate with governments to combat would-be terrorists who are organising online".

If this were not fanciful enough, Turnbull wants the rule of law to apply online as it does in what The Age calls the "analogue, offline world".

Remember, this comes from a man who claims to be digitally aware, one who has used the words "innovation" and "agile" more times in the last year than any other politician, and one who has repeatedly let slip little hints — like his use of an encrypted app for messaging — to give the impression that he knows his ones and zeroes.

At the same time, Turnbull has indicated that he is not seeking backdoors into encrypted applications.

As usual, there are no specifics. Last time I looked, Facebook, Twitter, and their ilk were all based in the US, a country which is highly unlikely to do anything to disturb them. So what Turnbull has in mind is mystifying.

That Turnbull continues to make such statements, putting himself very much on par with some of the pronouncements that have emanated from Attorney-General George Brandis, is surprising, considering that he has an educated adviser in the shape of Alistair MacGibbon to brief him on the basics of encryption.

But if all that Turnbull is seeking is to pass the time of day by making pronouncements as nonsensical as those uttered by his British counterpart, Theresa May, then he is going about things the right way.

Encryption has taken centrestage ever since the world became aware in 2013 that the NSA was conducting surveillance of man+dog. Since then, companies have been trying to guarantee clients that their data will be safe in order to attract more sales.

Microsoft has even gone to the extent of offering its American clients cloud storage in Germany, a country where data security is taken a little more seriously given its past.

The genie is well and truly out of the bottle and politicians who promise security measures which do not take reality into account are doing just one thing: telling porkies to score political points.

The only point at which this mess will be resolved is when politicians are willing to admit that terrorism is a political problem and requires a political solution. It is not a law and order issue.

More in this category: « Microsoft claims on Windows 10 S security blown away Encryption: Turnbull continues his Man of La Mancha ways »
Share News tips for the iTWire Journalists? Your tip will be anonymous