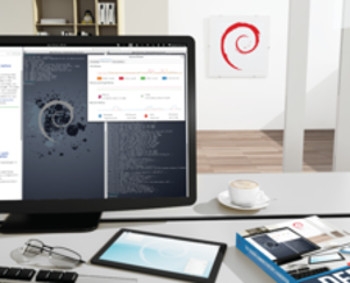 The Debian GNU/Linux project will turn 25 on Thursday, with the Linux distribution having made its debut on 16 August in 1993 under the leadership of the late Ian Murdock.

In its original manifesto, Murdock stated: "Many distributions have started out as fairly good systems, but as time passes attention to maintaining the distribution becomes a secondary concern."

Maintaining a Debian system was made simple after some developers created a package management system known as apt.

Apt — and its derivatives like aptitude and synaptic — have served to make the task of updating a Debian system simple. With apt, the secondary concern that Murdock referred to was effectively taken care of. Incidentally, there are now about 29,000 packages available in Debian.

Debian has served as the base for two distributions — there are more than 300 in all — that are well-known for different reasons. One, Ubuntu, is the most widely used distribution. The other, Knoppix, is the best known live system.

The primary reason for the Debian project's success has been its devotion to free software and the efforts put in by the more than 1000 developers worldwide to create a quality distribution. With three streams of development — stable, unstable and testing — Debian arguably has much more work to do to keep up with things.

But the team does a commendable job – and having used Debian, first the stable stream and later the testing stream, for all my work and personal needs since 2000, I can testify to this.

One more aspect that Murdock touched on in his initial manifesto was that the Debian development process would be open. This was in order "to ensure that the system is of the highest quality and that it reflects the needs of the user community". The quality comes from the fact that members of the Debian community are there because they want to be, not because they have to.

The initial goal to produce a non-commercial distribution that could effectively compete in the commercial market has worked out beyond the wildest dreams of any Debian developer.

Debian is, on the whole, a low-key project. Developers generally prefer to let their work speak for itself and there is unlikely to be much crowing or navel-gazing when the 25th anniversary arrives. But there will be a sense of quiet satisfaction at a job well done and a resolve to continue providing software of the same high standard for the next 25.

A short history of the project is here.

The writer has used the x86, AMD64 and mips ports of Debian on servers and single-boot workstations since the year 2000.

More in this category: « Nothing wrong with Google looking to expand into China Who will provide cloud hosting for Govpass? Ah, that is a good question »
Share News tips for the iTWire Journalists? Your tip will be anonymous