Dan Tehan and cyber security are a potent mix 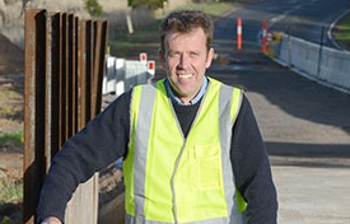 It would have been an interesting exercise to count the number of times that Dan Tehan, the Minister assisting the Prime Minister on Cyber Security, used the word "cyber" during his speech to the National Press Club in Canberra on Tuesday, while releasing the annual threat report crafted by the Australian Cyber Security Centre.

By my count, it was at least 20, with the last one being about "cyber terrorism". Asked about this particular cyber malaise by the press club's Sabra Lane later, Tehan floundered a bit and then resorted to bureaucratese to avoid saying anything that meant anything.

He read his — thankfully — prepared speech with a poker face, evidently trying to make it look as though hackers were waiting outside the doors of the venue to attack him if he so much as broke into a smile.

Tehan's mission appeared to be the same as the rest of his government colleagues: hype up the fear factor as much as possible so the government can control things and improve its chances of re-election.

Probably towards this end, parts of the report which could bring about big headlines — a compromise of a small defence contractor by some Chinese attackers was made to look like the sky falling in — was leaked to selective media outlets, who duly obliged with the hype that the government wanted.

That only one medium-level hack was seen in the last year in a country which lives and breathes via Microsoft software is a remarkable occurrence.

But the hype was not shared by the men and women who wrote the ACSC report, which was, as usual, a remarkably sober 60-page affair, with little or no sensation.

There was not a great deal of note in the report, but given that many people may be put off by the subject, one had to cover it as widely as possible, if only to encourage the ACSC to continue on the same sensible path.

One was reminded to some extent of Cris "SpaceRogue" Thomas, formerly of the L0pht Heavy Industries hacking collective and now a researcher with Tenable Network Security, who blew the claims of many sky-high with a 19-minute presentation at ShmooCon, an annual convention for hackers held on the east coast of the US, in January.

The ACSC staff could, understandably, not be as jocular and dismissive as Thomas, given that they are all government employees.

But they did a good job with the reporting, the writing and the graphics. The difference is that, unlike the plethora of reports from myriad security firms that one wades through, there is little marketing in the report. And that is always a good thing.

Just one suggestion: they could omit that picture of Tehan from the report. If he is going to be the face of cyber security in this country, Australia will indeed have a big problem.

More in this category: « The algorithm did it: Facebook's Stamos tries to shift blame Kaspersky founder needs to answer specific accusations »
Share News tips for the iTWire Journalists? Your tip will be anonymous