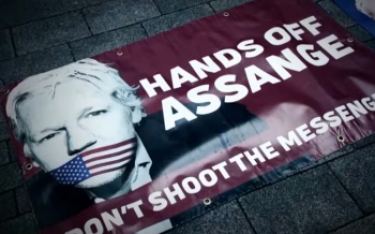 What is the value of an Australian passport? I'm sure that this question would have passed through the mind of WikiLeaks founder Julian Assange, one of the best hackers this country has produced — and I mean that in the original sense, as someone who plays around with software — many times over the years he has spent trying to hide from the US and UK authorities.

The document appears to have precious little meaning, given that Assange, an Australian citizen, is treated worse than a convicted murderer in a British prison, while the Americans salivate outside and a biased judge looks on, waiting to make a decision to send him over to the US for trial.

Australia has the guts of a chicken — a very little chicken, as Rene Artois of 'Allo 'Allo fame used to say — when it comes to dealing with the US, even when it concerns its own citizens. The only time that Canberra will speak to the Americans about such matters is when something gets in the way of a politician's chances at an election.

In recent times, one would recall the case of David Hicks, who was picked up by the Americans in Afghanistan and taken to Guantanamo Bay. No matter how much then prime minister John Howard was harangued about this case, he just turned a deaf ear.

But finally, when Hicks became an election issue in 2007, and Howard's poll ratings were taking a hammering, he appealed to US vice-president Dick "Kaboom" Cheney and engineered Hicks' deportation back to Australia.

As Wikipedia says, "In November 2007, allegations from an anonymous US military officer, that a high-level political agreement had occurred in the Hicks case, were reported. The officer said that 'one of our staffers was present when Vice-President Cheney interfered directly to get Hicks' plea bargain deal. He did it apparently, as part of a deal cut with Howard'.:

Howard, true to form, has always denied any involvement in the plea bargain.

In Assange's case, we see the most shameful behaviour from our politicians, who act as though the man is being put through an unbiased trial, when in reality everything is stacked against him.

Three politicians have set themselves aside from this shame, by trying to get some relief for Assange. George Christensen, Andrew Wilkie and Senator Rex Patrick have been asking the foreign minister Marise Payne to grow a backbone and stand up to the UK and US authorities.

As The Guardian Australia reports, the trio have reacted to reports that there had been plans to poison or kidnap Assange while he was taking refuge in the Ecuadorian embassy in London, with Christensen telling the newspaper: “The latest revelations show a foreign power tried to use illegal means to harm an Australian citizen.”

Wilkie, who accompanied Christensen to see the UK ambassador to Australia, Vicki Treadell, and raise their concerns about Assange's welfare and ask if British law was being impartial in his case, said: “I also spoke about how the UK, US and Australian Governments are misjudging the community mood on this and the mood has shifted in recent times."

Senator Patrick said Payne should act now to show the US and the UK that Australia would not accept such treatment of one of its citizens.

He said Payne needed to make a very clear public statement of support for Assange, "whose position as a journalist is no different from the editors of The New York Times, The Guardian or the Sydney Morning Herald which all published the same leaked US government reports and cables that are at the heart of this case".

Every time the Australian Government is asked about Assange, it immediately says that it cannot meddle while British justice takes its course. Yeah, sure.

The government's attitude in the Assange case has been nothing short of shameful. All that he did was to publish material about the illegal way in which the Americans acted in Iraq, killing civilians and journalists in cold blood as though it was some kind of entertainment.

More in this category: « Come to heel, Australia, says Pichai, holding out a carrot RMIT's Gregory is spot on: the NBN Co corporate plan is another lemon »
Share News tips for the iTWire Journalists? Your tip will be anonymous