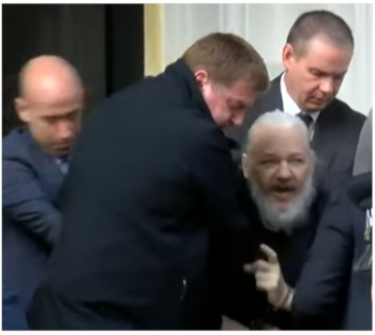 WikiLeaks publisher Julian Assange turned 49 on Friday. A day later, the country that is his persecutor, marks the 244th birthday of its founding.

Assange is rotting in a maximum security prison in Belmarsh, jailed by Britain for having skipped bail and retained there while a judge decides whether to extradite him to the US.

After years of intimidation and what amounts to torture, one of the bravest Australians of all time sits in a jail cell alone 23 hours a day, with no government minister in his own country even bothered about his fate. A few brave politicians, among them Andrew Wilkie and George Christensen, have taken up his cause.

But things do not look good for the man who exposed the cynicism and savagery that Washington displays in combat areas, when WikiLeaks released a video titled Collateral Murder that showed unarmed Iraqi civilians being gunned down by an American helicopter in Iraq.

The US made a formal request for Assange's extradition on 6 June 2019. Assange was arrested by British police on 11 April and removed from the Ecuador embassy where he had taken refuge. His asylum was withdrawn shortly before he was arrested and he appeared in court shortly thereafter.

He was later sentenced to 50 weeks in jail for skipping bail at the time he fled into the Ecuador embassy; at that time, he was wanted in Sweden for questioning on rape allegations made against him by two women.

Sweden subsequently reopened the rape probe and sought his extradition; it had dropped the charge and cancelled the warrant in May 2017. The probe was closed in November 2019.

Soon after his arrest in London, the US sought his extradition to face charges of computer hacking and being involved in a compromise of classified information, a charge that carries a maximum sentence of five years.

Washington made its intentions clear on 24 May last year when it hit Assange with 17 new charges under the US Espionage Act over his alleged role in leaking documents from former US intelligence analyst Chelsea Manning in 2010.

The DNC leaks in 2016 have been claimed to be responsible, to some extent at least, for the defeat of Democratic candidate Hillary Clinton in that year's presidential polls.

Recently, a US federal grand jury issued a second indictment against Assange, charging him with recruiting hackers to commit computer intrusions to benefit the whistle-blower website.

The Justice Department said the new indictment did not add any new counts but broadened the scope of the conspiracy surrounding the intrusions with which Assange was charged earlier.

The indictment claimed in 2010, Assange had gained unauthorised access to a government computer in a NATO country. It added that in 2012, Assange communicated with Hector "Sabu" Monsegur, the leader of the hacking group LulzSec — who was then co-operating with the FBI — and gave him a list of targets to hack.

It said in the case of one target, Assange asked Monsegur to look for (and provide to WikiLeaks) mail and documents, databases and PDFs.

In another communication, Assange told Monsegur that the most impactful release of hacked materials would be from the CIA, NSA, or the New York Times, the indictment alleged.

"WikiLeaks obtained and published emails from a data breach committed against an American intelligence consulting company by an 'Anonymous' and LulzSec-affiliated hacker. According to that hacker, Assange indirectly asked him to spam that victim company again," it said.

Manning is still in jail, having been returned there after she was pardoned by former US president Barack Obama when he left office in 2017. She was jailed afresh for having refused to testify to the grand jury.

More in this category: « Whither Fuchsia? Will the new OS be Google's way to avoid sharing Linux code? ABC man underlines demand for digital firms' money 'for public services' »
Share News tips for the iTWire Journalists? Your tip will be anonymous