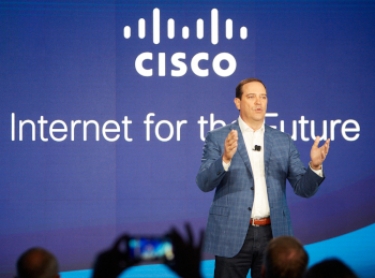 Networking giant Cisco has unveiled a single processor architecture to be used both for network routing and swithcing equipment, claiming that it would be able to handle data better than existing chips.

At a function in San Francisco on Wednesday, the company introduced Silicon One, its new networking architecture that it says can be used at any point in a network, and the new Cisco 8000 series routers that use the new chips, saying these were part of its strategy for the "Internet of the future".

Along with a new operating system, IOS XR7, the company says this combination will serve as the backbone of the Internet for the next few decades.

Cisco chairman and chief executive Chuck Robbins “Innovation requires focused investment, the right team and a culture that values imagination. We are dedicated to transforming the industry to build a new Internet for the 5G era.

"Our latest solutions in silicon, optics and software represent the continued innovation we're driving that helps our customers stay ahead of the curve and create new, ground- breaking experiences for their customers and end users for decades to come," he said.

The new processors are claimed to support near-term performance of up to 25Tbps. Cisco claims, "The first Cisco Silicon One 'Q100’ model surpasses the 10Tbps routing milestone for network bandwidth without sacrificing programmability, buffering, power efficiency, scale or feature flexibility."

Presumably in order to lend weight to the announcement, representatives from Microsoft, Facebook and Google Cloud were also present.

Amin Vahdat, fellow and vice-president of Systems Infrastructure, Google Cloud, said: “We look forward to working with Cisco as it enters the high-end routing silicon space, collaborating to help meet the next generation of network demands for higher speeds and greater capacity."

Najam Ahmad, vice-president of Network Engineering at Facebook, added: "“Facebook has been a strong advocate for network disaggregation and open ecosystems, launching key industry initiatives such as the Open Compute Project and the Telecom Infrastructure Project to transform the networking industry.

“Cisco’s new Silicon One architecture is aligned with this vision, and we believe this model offers network operators diverse and flexible options through a disaggregated approach.”

More in this category: « Superloop, Comscentre partner on delivery of network, hosted and managed services
back to top