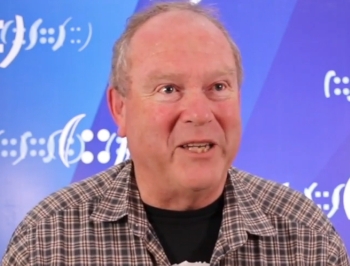 Geoff Huston: "I was hired by the university peak body to set up a national network to link all universities and CSIRO at the start of 1989 and that’s pretty much what I did," Courtesy YouTube

The first employee of Australia's Academic and Research Network, Geoff Huston, is still very much a nerd and one not inclined to puff up his own achievements – which include playing a pivotal role in setting up the Internet in this country 30 years ago. He believes the Internet has become toxic with inadequate security.

Huston has a very realistic view of what lies ahead, as evidenced by a talk he gave at a recent Telecommunications Society meeting in Melbourne.

The slides for that talk are well worth a look; towards the end, he posed a number of questions: "In a world of abundant content what do we choose to view? What do we choose to believe? Search becomes the arbiter of content selection and assumes a level of ultimate importance in this world. What’s the social outcome of search being dominated by a single entity?"

Asked to look ahead, Huston, now the chief scientist at the Asia Pacific Network Information Centre, told iTWire that 30 years ago there were no smartphones, laptops were luggables, and computers lived in large air-conditioned special rooms with heaps of worker bees tending to them.

"The telephone companies were the largest enterprises in almost every country and nothing looked like it would ever change," he said.

"Today – let's see, awesome compute power in my pocket, high-speed mobile communications, Wi-Fi in planes, driverless cars, cashless money, automated trading, death of newspapers, death of television networks, death of the telephone and telephone companies, death of the bricks and mortar shop, huge displacement of the labour force as we shift from primary and secondary production to a service-based economy, new forms of labour exploitation with the so-called gig economy, and an entire new economy based on surveillance capitalism.

One of the slides from Geoff Huston's talk at the Telecommunications Society in Melbourne recently. Courtesy Geoff Huston

"And you want to crystal ball gaze into the future about the changes to come? I’d be as wrong today as I would’ve been wrong 30 years ago had you asked me then!"

Huston said his personal view was that the world faced a a whole new set of challenges and it was unclear if people had the tools and capabilities to ensure a reasonable outcome.

Another of his slides which were used for his Melbourne talk, read, in part, "The Internet is now a toxic wasteland that glows in the dark!"

Regarding his role in bringing the Internet to Australia, Huston, the former technical manager of AARNet, said he had no particular personal anecdotes to offer around his experience. But his CV makes it clear that this is far from being the case.

"I was hired by the university peak body to set up a national network to link all universities and CSIRO at the start of 1989 and that’s pretty much what I did," he said, breaking down something very complex into what sounds like something very simple.

"I got sucked into all kinds of fights with all kinds of people – some were won, some lost. But the objective was simple – get a national IP network up and running quickly, and that’s exactly what I did. Started the job in January '89, first connection up in June '89, fully functioning national network connecting all universities and Colleges up and running by May 1990."

But in the years after that, what happened was that it became evident that the matter did not end there.

"What emerged in the ensuing years was that this was far larger than just the universities and far larger than just a network to link up academics and researchers," Huston said. "We found ourselves as a university-based activity (it seems like any other term would be a little too grand for a two-person outfit!) running a very large wholesale ISP, growing every month.

"We became a victim of our own success, I guess, and it was logical for the universities to sell the network off to Telstra in 1995 to try and get out of a situation that the universities found to be somewhat uncomfortable and unmanageable."

More in this category: « First packets transmitted on Internet Down Under 30 years ago When one man ran the Australian domain name system... »
back to top