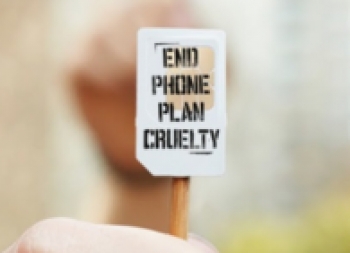 Vodafone Australia has released new ads to bolster awareness of the  major revamp of its mobile plans announced last week. The ads featuring a demonstration of irate mobile users marching and holding up SIM sized placards to protest bill shock may actually be closer to the truth than some carrers care to admit.

Last week Vodafone announced what it says is its ‘biggest ever plan shake-up, with unlimited standard national calls and texts in all its new plans, which it says is designed to minimise the possibility of ‘bill shock’.

“We know the fear of bill shock is holding many Australians back from using their smartphones with confidence,” said Vodafone’s chief marketing officer Loo Fun Chee, who joined the company earlier this year from Filipino telco Globe. “When our customers make a call, whether here or overseas, or stream a song, we want them to do this without worrying about receiving a big bill.

“Bill shock continues to be a nightmare for some Australian consumers. While we’re already confronting the issue head-on with some market leading solutions, today we’re stepping up our campaign.”

Chee said all Vodafone’s new business and consumer prepaid and postpaid voice plans will now include unlimited standard national calls and texts. “The telco industry has long been criticised for its complicated products,” she said. “Including unlimited standard national calls and texts in all of our new plans makes calling or texting as simple as it should be.

“We are looking at every aspect of the customer lifecycle, including every day usage, to see how we can help build usage awareness and confidence to minimise bill shock. Data Workout, automated data overage and spend alerts have been very effective in building awareness of data usage and helping to prevent bill shock, but as our usage continues to evolve, so should the safeguards protecting customers.”

Vodafone has also introduced automated overage for standard international calls to selected countries, charged at a flat rate of $6 for 60 minutes.

As well as introducing the new plans Vodafone has started a major new advertising campaign, with ads promoting the new plans airing on free-to-air and SVOD TV. The ads feature crowds of demonstrators holding tiny SIM-shaped protest signs. The ad campaign will also feature on radio, outdoor and social media.

More in this category: « iPhone 6 Plus iSight camera replacement program Navman Moves you »
Share News tips for the iTWire Journalists? Your tip will be anonymous