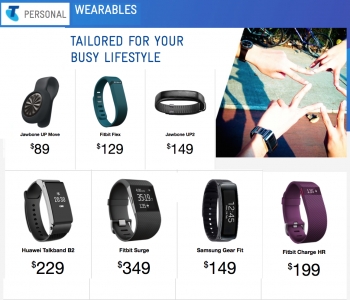 With wearables delivering actionable fitness, information and lifestyle benefits, Telstra has decided now’s the time to offer the public an affordable range across 370 stores.

Telstra made an announcement about adding ‘a standalone range of wearables’ to its online and in-store range in all 370 of its stores across Australia at its Telstra Exchange blog by its Director of Device Management, Andrew (Andy) Volard.

You can read the blog post in full here.

Volard explains what wearables are, describes why they’re useful, and explains why Telstra has decided to enter the retail wearables market.

Noting that wearables are smart technologies you wear, such as ‘watches, glasses, fitness bands and more’, Volard explains that wearables are an extension of your smartphone, providing you with a range of useful notifications, along with sensors to measure things like heart rate, steps, sleep and other measurements.

However, Telstra isn’t going into all facets of wearable technology yet, but is instead focusing on a range of ten handpicked wearables. Volard says ‘we’ve selected some of the best wearables in the market from leading brands such as FitBit, Garmin, Jawbone, Samsung, Huawei and Striiv.’

As of publication, the wearables page at Telstra’s site only lists seven devices for sale, but with Volard stating the range has ten devices, there are clearly more on the way. Indeed, a photo that Telstra supplied shows 12 devices in the display cabinet - perhaps a couple are duplicated in a different colour or style.

Telstra has been investigating wearables for a while now, more recently with its Wearable Wednesdays series of blog posts at the Telstra Exchange Blog, and by working with Google Glass since late 2013 as covered in an iTWire article with video from May 2014 which looked at Telstra’s Google Glass app development for visual and hearing impaired people.

Volard explains that the new range is designed to ‘up your fitness’, ‘give you more information’ and ‘encourage you to live a healthier lifestyle’, breaking down each of those areas with greater detail, such as tracking your fitness levels and heart rate helping you decide ‘to increase or introduce certain behaviours’ such as when to get moving, as well as getting notifications such as caller ID, text messages and music controls from your wrist.

Naturally, Volard explains that you will be able to walk ‘into your local Telstra shop’ and try any of the wearables out to see if any of them work for you, and that Telstra is able to ‘help you find a wearable that suits your budget, your lifestyle and your smartphone whether it’s Android or Apple.’

No mention of Windows Phones or even Microsoft’s own fitness wearable known as the Microsoft Band - but with the start of the wearables section of the store there’s clearly scope for it to be enhanced into the future with a greater range of ever more advanced wearable devices.

And, as a phone company is a place where you can buy the technology you want on a contract and pay it off over 12 or 24 months, Telstra is willing to let you do that with any of these wearables on the condition that you have ‘an existing Go Mobile Plan with Telstra’,

Clearly, Telstra is trying to increase the number of reasons beyond the existing quality of the network as to why you’d want to voluntarily pay more to Telstra for the quality of its cellular, fixed and Wi-Fi networks and grow its retail sales of modern technologies to its customer base.

And with a ton of retail competition from the traditional major CE stores such as JB Hi-Fi, Officeworks, Dick Smith, Harvey Norman, Good Guys, Bing Lee, and others out there, let alone the other telco stores, it makes sense to engage with your existing customers while attracting new ones.

If it really is successful, we’re sure to see Optus, Vodafone, Virgin Mobile and other phone stores introducing a curated range of wearables and smartwatches of their own, presumably on a similar kind of contracted plan, whether brand new or attached to an existing phone plan.

After all, at least some of the aforementioned consumer electronics retailers already have well defined retail displays of a range of wearable devices, including smartwatches - JB Hi-Fi and Officeworks immediately come to mind - so it’s not just Telstra that sees the potential, they’re just the first telco to do so - or at least, according to Telstra.

Here’s Andrew Volard’s video with more details on the new move to have Telstra proudly wear the wearables mantle while taking a piece of the wearable action and walking the wearable walk!

More in this category: « iPhone back in most markets – part II Samsung wants more EDGE »
Share News tips for the iTWire Journalists? Your tip will be anonymous