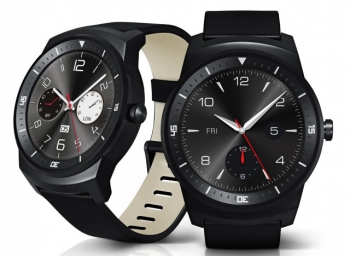 It arrives just in time for 2014’s Christmas end-of-year silly shopping season and with all the other smartwatch activity this year, finally truly advances the art of the smart watch that has in some way have been around with us since the first calculator watches in the late 1970s and early 1980s, while the years pre-2010 saw several attempts at watch phones, including from LG.

Sadly, Casio never seems to have progressed beyond its calculator ‘data-bank’ watches I loved so much growing up, and only Samsung seems to truly be pushing the art of the phone and watch in one with its rather excellent Gear S.

Apple is moving down a different path including a completely new mobile device UI with its still unreleased first-gen Apple Watch, but coming head on from the other direction is Google with its rapidly advancing but still very young Android Wear platform.

The first Android Wear watches have been rectangular, including LG’s own first G Watch.

It’s a shape one of Apple’s execs said was better for displaying information than a round display, which can cut some information off.

It’s a criticism I have seen in online reviews of the Moto 360 and LG’s G Watch R, but a round face still does look very cool - and very traditional.

That said, none of the Casio calculator watches I wore over the years were round - they were all rectangular, and I loved them all - until they stagnated and stopped offering any new capabilities for what were essentially basic built-in apps over previous models save for minor design changes.

So, back to LG’s G Watch R. As LG boasts in its media release, it does indeed appear ‘as a beautiful, well-crafted piece of bling for your wrist’.

LG says it looks like that on purpose as the company ‘genuinely sought to offer up a truly classic looking timepiece’.

Of course, the look of the watch as a classic analog timepiece is just a computer generated illusion, as a software watch with P-OLED display can be programmed by LG and/or Google to display any watch face you want.

In that vein, LG says there are many traditional-style watch faces built-in, letting you select a watch face that matches your style, be it a formal suit to jeans and a t-shirt.

As with Apple’s Watch and fitness wearables like the upcoming FitBit HR and Surge, LG’s G Watch R also features a ‘photoplethysmography (PPG) sensor’ which is a ‘ highly sophisticated heart-rate monitor that helps to keep you across your daily workouts’.

The watch has 4GB storage, 512MB of RAM and a bigger batter than the original square-faced G Watch, with the additional storage space allowing ‘room for a number of wearable-specific apps, including the LG health and fitness app.’

As with the first G Watch, you can use any standard 22mm wrist strap/band that you want, with watch bands widely available for regular watches at watch stores, jewellery stores and often at keycutting type stores that replace watch batteries.

LG Electronics Australia’s GM of Marketing, Lambro Skropidis talked up LG’s launching of the LG G3, its quite amazing and world first 4K Ultra HD OLED TVs and the previous G Watch, and stating that LG has “made a concerted effort to be at the forefront of their introduction to the Australian market.”

He adds that: “The G Watch was a great first attempt, and the new G Watch R is in a whole new league. It’s not only beautiful to look at; it offers a range of customisable watch faces within its gallery. I also think it’ll take wearable devices to the next level – the G Watch R will see wearable tech make the transition from fancy gadget, to everyday companion device and onto genuine fashion statement.”

The G Watch R actually went on sale on Friday 7 November, with LG only informing the tech media of this today.

It retails for $359, and can be purchased from JB Hi-Fi, Harvey Norman, Optus stores and other retailers.

Specs are as follows: