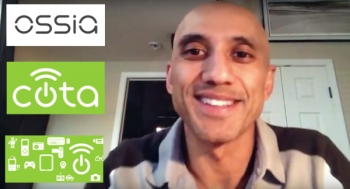 Imagine, for a moment, that your wireless smartphone required you to put your phone onto your Wi-Fi router to receive information wirelessly.

Sounds completely ridiculous, right? After all, you can take your smartphone or tablet virtually anywhere in your home and have it connect to your Wi-Fi router.

Walk outside and you can connect to 3G and 4G signals just about anywhere - no-one requires you to stand next to a phone tower and rest your phone on it to get a signal.

With these facts established, why is it then that today’s primitive wireless power systems require us to place our devices onto a special charging pad that is itself connected to a power cable?

Where is the system that allows wireless power to be received as effortlessly as a Wi-Fi or cellular signal?

Well, dear readers, a glorious future of true wireless power is nearly here, having operated in stealth mode for the last couple of years and which is about to be unleashed unto the world at the January 2016 CES, and which, all things going well, will be on retail sale in 2017.

Its creator is a company named Ossia which is making its pitch of ‘real wireless power’, and asks us to ‘think of all of the devices you rely on every day: smartphone, remote control, smoke alarm, electric toothbrush. Now imagine you never have to think about charging them again. No more plugging devices into the wall. No more replacing the batteries. That’s Cota. That’s real wireless power!’

iTWire conducted an interview with Abid Hussain, Ossia’s Chief Commercial Officer, who briefly explains in the video his extensive technological experience which included leading the team that sold Qualcomm the ‘Quick Charge’ technology its chipsets offer and which are used in many of today’s popular smartphones.

Abid also explains that Cota isn’t an acronym for anything, although one might be applied retrospectively. That said, a reader noted to me on Facebook after this article's posting that Ossia's patent for Cota notes it stands for 'charing over the air', which makes sense - and, at least to me, is the obvious way to describe it.

After watching the video, which is embedded below, I can only imagine you will agree that Abid and his colleagues at Ossia are working on something truly special, something that takes today’s wireless power solutions and firmly outclasses them with absolutely next-generation technology - a development whose time has come!

Cota is described on the Ossia site as defying what most people believe is power, thanks to its unique wireless power charging capabilities that can take not just wires out of the picture, but even batteries, too.

It’s easy to image the impact Cota can have on medical devices, retail, home devices and all the Internet of Things technologies and sensors, leading to an endless array of possibilities.

Before we get to the video, how does Cota technology work? Through a unique power charger that focuses and delivers non-line-of-sight every to specific locations of devices safely and intelligently.

The article continues (with two must-see videos below) after this ad, please read on!

Ossia’s site explains that a single Cota power charger gives you more freedom by safely powering any Cota-equipped device within a 30-foot radius, even as devices move around, which clearly breaks new ground in wireless power technology.

The Cota receivers are naturally small and Ossia says they ‘can be embedded into electronic devices without impacting their size and design characteristics.’

Indeed, Ossia says that ‘if a device can use Wi-fi, Cota leverages its Wi-Fi antenna to receive power.’

‘In fact,’ says Ossia, ‘Cota receivers are small enough to fit inside standard-sized batteries, breathing new life into the electronic devices you already have with true wireless power delivery.’

This is exciting stuff, folks. There’s plenty more to read at the Ossia website, but for a closer look, here are two great videos - the first is my interview with Abid Hussain, Ossia’s aforementioned Chief Commercial Officer, and then Ossia’s own video showing and explaining how Cota works.

In the first video, we talk about a wide range of issues, including the safety of COTA’s wireless power transmission, Ossia’s work with the FCC, the coming unveiling at CES 2016 in Las Vegas and much, much more.

So, here’s to Ossia’s success and the introduction of a true wireless power revolution - and the banishing of charging pads into the recycling bin of history!