VIDEO: Acer Aspire R 13 with a twist that’s a hit for six! Featured 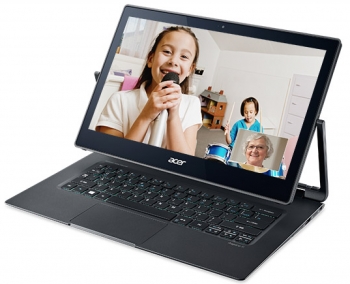 Acer is aspiring to take on the innovative Lenovo Yoga Pro 3 and Microsoft Surface Pro 3 with an innovative design all its own, and while it has shades of Dell’s 2010 Duo and Dell’s 2012 XPS 12, this is the most unique 2-in-1 on the market.

Over the last couple of years, the world has finally seen some truly innovative new 2-in-1 designs that well and truly break the mould of convertible tablets from the pre-iPad era.

We’ve seen Microsoft and its Surface Pro series that goes all-in on the slate design with magnetically attached keyboard.

We’ve seen 2-in-1’s with detachable keyboard that can’t be pushed back too far due to too much weight in the tablet screen.

We’ve seen devices like Lenovo’s Yoga Pro series (and others) that can have the screen fold all the way back to rest on the base of the keyboard, with Lenovo’s incredibly slim Yoga Pro 3 and its ‘watch band’ inspired hinge go to new lengths in creating the ultimate 2-in-1 device.

We’ve also seen Dell’s 2010 Duo and its XPS 12 first released in 2012 with swivelling screens which Acer seems to have been partly inspired by.

But with all those previous designs, there’s nothing like Acer’s brand new Aspire R 13, with its ‘Ezel Aero Hinge’ and accompanying U-frame structure that lets you easily fold the R 13 into six usage modes, as you’ll see in the accompanying Acer promotion video embedded below.

Of course, as a device that aims to be truly premium, as do the devices from Lenovo, Microsoft and others, you get the option of WQHD displays that are similar in ultra-smooth sharpness to Apple’s Retina displays on its MacBook Pros, or cheaper Full HD screens, you get Corning Gorilla Glass 3, SSD drives and an optional ‘Acer Active Pen’ for full stylus-enabled tablet functionality.

The Acer Aspire R 13 is also a 2015 CES Innovation Awards Honoree, which means it is a highly rated finalist with innovative design and engineering, and is in the running to win a coveted 2015 CES Best of Innovation award at the 2015 International CES held in Las Vegas in January.

So, what are those six modes, and how is it all handled?

The R 13 uses the aforementioned ‘Ezel Aero Hinge’, into which the 13.3-inch screen is affixed at the sides, allowing the screen to rotate 180 degrees so it can be used in six different ways.

An image of the six modes is below - they almost made me think of Egyptian hieroglyphs, with the images in order corresponding to the list of six below this image:

First up is the traditional Notebook mode - flip up the lid and there’s your screen, keyboard and trackpad for traditional work patterns.

The second mode is the Ezel mode, which brings the display half-way over the keyboard, so the screen is closer to your eyes.

Third is the stand mode, which brings the screen over the keyboard, but at an angle that makes it easy to draw, take notes, brainstorm, edit artwork or other pen and touch interactions, with the stand promised to be sturdy enough to take the pressure of a hand on the screen as you work.

Fourth is the Pad mode sees the screen fold down flat onto the keyboard, so you’re in tablet mode - but without having the keys on the underside of the machine as other 2-in-1 devices force you to do.

Fifth is the Tent mode, made famous by devices such as the Lenovo Yoga Pro series, so the screen is closest to you in an almost, but not quite vertical position - useful for tight spaces in planes or elsewhere where you just want to consume content like videos, books, touch-based browsing or other scenarios.

The sixth and final mode is the display mode, where the screen faces you but the base of the laptop is being the screen laying flat - as opposed to the tent mode where either side stands up like two sides of a triangle.

These six modes are supported by Acer’s ‘dual-torque’ system that promises to keep the display stable and in place when touch or the stylus is used.

Both the screen and the top lid are encased in Gorilla Glass 3 for extra protection, with a WQHD model with 2460 x 1440 resolution and a cheaper Full HD model at 1920 x 1080 res, with both display types delivering ‘Zero Air Gap Technology’ for an image that seems to pop off the screen, rather than under it, while also reducing reflections, heightening contrast and improving readability in sunlight.

The Full HD model also has IPS for greater widescreen visibility at more angles, although whether this means the WQHD doesn’t have an IPS equivalency, I don’t know and will find out from Acer.

The screens also have an oleophobic anti-fingerprint-smudge technology, am ambient light sensor automatically adjusts brightness as required and Corning’s new AR/ETC technology is there to minimise reflections and improve contrast.

The Acer Active Pen is optional, which is a shame as it could have been included with every model, but presumably because of cost it’s an optional thing that not everyone will get. At least the option is available, as it would be better than simply using a capacitive stylus as you would on iPads and most Android tablets.

As a proper tablet stylus, you get a pressure sensor for proper drawing capability, as well as a hover sensor for access to more functions, and as you’d expect, there’s palm rejection technology so you can rest your palm on the screen as the stylus is in your hand.

The Aspire R 13 is available in different models, with WQHD of FHD screens, Intel Core i5 or i7 processors, up to 1TB of SSD storage (by using two 512GB SSDs) and up to 8GB of RAM.

You also get features such as Dolby Digital Plus Home Threater, Skype certification and dual-array mic for better audio and video conferencing, and a dual air-intake design for what Acer promises is ‘comfortable and noise-free computing’.

We can also see that WQHD screen suck up a lot of power, with only the models equipped with FHD screens promising ‘up to 8 hours of battery life’.

Fascinatingly, Acer's media release does not mention the words Microsoft Windows 8.1 once, although I guess we all know it's Windows 8.1 we'll be getting on this model. The US version of Acer's site (linked below) says 'Acer recommends Windows' in the top right hand corner, and while you do see the Start screen on one of the on-screen images, you don't see any further mention of Windows 8.1 until the models with various specs at the bottom of the page.

Perhaps once Windows 10 is released later in 2015 we'll start seeing Acer make more of a song and dance about the Windows OS, but for now it appears - at least to me - to be a case of 'don't mention the war!'.

In addition, and a bit annoyingly, Acer has announced these new R 13 models today in Australia (after having launched it last month in the US), but they’re not yet on Acer’s Australian website - aside from a sneak peek video on the front page.

When they do go live in Australia, you’ll find them on this page.

To actually see the sales blurb and other deatils, you have to go to the Acer Aspire R 13 page at Acer’s US site here, but of course what you’ll be seeing are US prices that are cheaper than prices we’ll see in Australia - so don’t be surprised local prices are inevitably higher.

UPDATE: We spoke to Acer's Australian PR team this morning, and they advise the Aspire R 13 starts at $1999 and is available instore from Harvey Norman now. Presumably, other vendors will follow but Acer's PR team can only confirm Harvey Norman for now.

Somewhat confusingly, you’ll see at the US Acer site that the Aspire R 13 model numbers are all dubbed the Acer R7-something-or-other, which is weird, but is the strange way that model numbers seem to work.

Acer and other companies - it wouldn’t hurt to have local pricing and easily recognisable model numbers BEFORE you launch a product and then send out a press release. I can understand the desire to get the information about new models out there quickly, but that doesn’t make it any less annoying when something has been announced and all the details just aren’t there yet.

I could complain all day about this, but in reality, Acer will have its new pricing up soon enough, and in the grand scheme of things it’s not a big deal, but having the details and prices at launch helps avoid me writing the last five paragraphs simply because the details weren’t available when I was writing this article!

So, to conclude, it’s really great to see more innovation in the 2-in-1 space, and Acer’s design looks like it is a true contender for being the best 2-in-1 yet, which will only get better once Windows 10 launches in 2015.

It will be fascinating to see how Lenovo and Microsoft respond with future versions of its products, and what other companies such as Toshiba, HP, Dell and others do to respond to Acer's new design, too.

Until then, if you haven’t already been tempted by the crunchy Mac side of the force, or some other Windows tablet brand, and you’re looking for a new 2-in-1 Windows-powered computer, the Acer Aspire R 13 is definitely one to add to the short list!

More in this category: « Would you pay US$1171 for in-flight internet access? Australians ‘addicted’ to smart devices, but believe we lag behind in digital »
Share News tips for the iTWire Journalists? Your tip will be anonymous