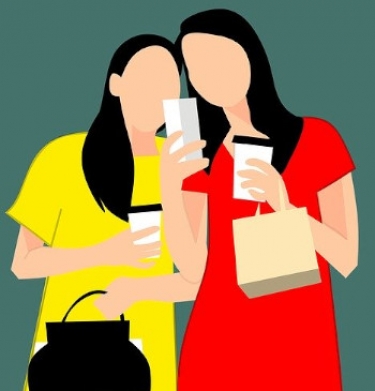 The sell-through of smartphones in the US — the proportion of wholesale units that are eventually sold at retail — fell by 25% year-on-year in the second quarter of 2020, the technology research firm Counterpoint Research says.

In a statement, the company said pre-paid channels were affected the most during the coronavirus outbreak, even though more stores selling phones on this bases remained open compared to post-paid operations.

Counterpoint's North American research director Jeff Flack said the weakest point for sell-through was from mid-March to mid-April, as that period was the height of the COVID-19 lockdown.

"April was the weakest month for smartphone sell-through as about 80% of smartphone sales channels were closed," he said. "Sell-through volume was down more than 50%. Smartphone sales for May through to the end of June grew week-over-week. June 2020 sales were stronger than June 2019 sales, which shows the US smartphone market is resilient.”

He added, “US smartphone sales picked up when the first stimulus cheques were received by consumers during the second half of April. Soon after, carrier stores and national retail began opening again, which further helped the recovery.

"There was also a bit of pent-up demand created by the weeks of store closures. Many consumers who may have wanted a new device, but still had a functioning phone, simply put off their purchase. 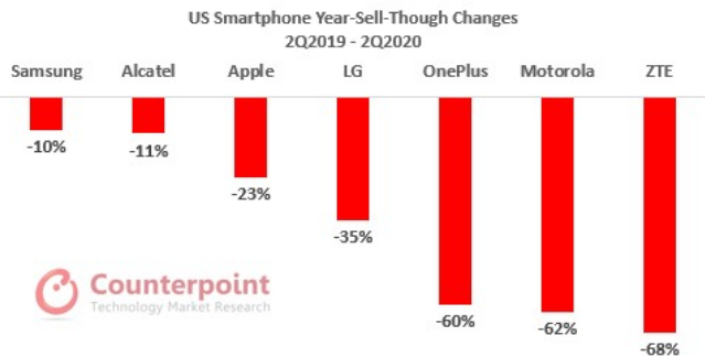 "Finally, US operator net additions will probably not be as disappointing as smartphone sales, due to spikes in sales of hotspots, other connected devices, and used smartphones being connected again.”

Regarding the performance of OEMs, senior analyst Harish Bhatia said: "All OEMs were down in Q2 year-on-year. Due to lockdowns, the share of online sales grew from 14% last year to 31% this year.

"However, because of their strong online presence, Samsung and Apple volumes fared better than the overall market, aided by a higher percentage of online sales. Alcatel also performed well considering the tremendous market decline. Alcatel benefitted from solid sales within government-subsidised programs and within pre-paid channels.”

Regarding the Samsung Galaxy S20 launch, Bhatia added, “The timing of the S20 family launch was unfortunate. Just as channels filled with devices, the majority of stores closed. This led to an estimated 38% fewer Galaxy S20 series activations than last year’s S10 series during the opening four months, the March through June period. Many potential Galaxy S20 purchases will simply be pushed into Q3, but some will be lost.”

Fieldhack had something to say about the Apple iPhone SE launch at the end of April.

“Apple volumes grew through the quarter and were especially helped by iPhone SE volumes," he commented. "It was not a typical Apple launch with much fanfare and a launch event at the Steve Jobs Theatre, which normally also includes a TV ad blitz. However, the device has been successful and is selling above expectations in both post-paid and pre-paid channels.

"Since the iPhone SE launched, carrier stores and national retail have been re-opening. Some channels saw large promotions to draw shoppers back to stores.

"This was especially true within Walmart, Metro by T-Mobile and Boost. Our checks show that iPhone SE sales are unlikely to be cannibalising the expected autumn 5G iPhone sales.

"iPhone SE buyers are more pragmatic about price, less concerned with 5G, and the smaller display is not considered a turnoff.

"More than 30% of iPhone SE buyers were earlier using an iPhone 6S or a handset that was four years old or older. More than 26% of iPhone SE users switched from an Android device, which is higher than the usual rate seen for switching from Android to iOS.”

More in this category: « Optus deploys generators in regional areas to bolster network Lockdown meant no Indian smartphone shipments in April »
BACK TO HOME PAGE
back to top