Three-fourths of Britons cannot live without their smartphones Featured 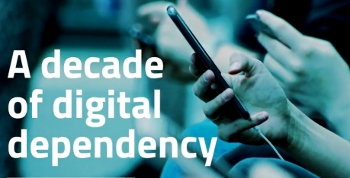 Seventy-eight percent of Britons say they cannot live without their smartphones while 71% say they never turn it off, a report from the UK's Office of Communications covering the last decade says.

Smartphones are now used by 78% of the British population, with the use among 16-24-year-olds being much higher at 95%.

A decade ago, when the smartphone took off in the UK in 2008, only 17% owned one of these devices.

The report said Britons now checked their smartphones, on average, every 12 minutes while they were awake. Forty percent of adults looked at the phones within five minutes of waking up, with 65% of those under 35 doing so.

And about 37% of British adults checked their smartphones five minutes before going to bed, with the figure again much higher for those under 35 - 60%.

The report said most people now expected to be connected to the Internet round the clock, with two-thirds of adults saying the Internet was an essential part of their lives.

"One in five adults (19%) say they spend more than 40 hours a week online, an increase from 5% just over 10 years ago," the report said. "For the first time this year, women spend more time online than men." 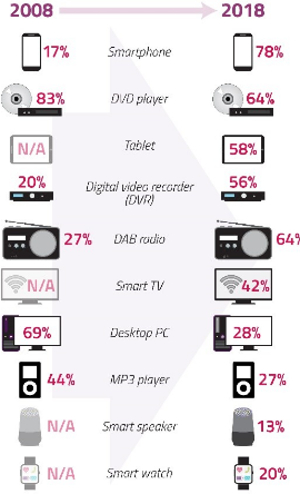 But there were downsides, with 15% saying that being online made them feel as though they were always at work. More than half (54%) said connected devices interrupted face-to-face conversations with friends and family, and 43% felt they spent too much time online.

But there were some who were not so dependent on the Internet: 10% felt they were more productive offline, with this percentage rising to 15% for those aged 18 to 34. Sixteen percent said they felt less distracted.

While only 20% accessed the Internet using mobiles a decade ago, that figure had grown to 72% in 2018, with the average individual spending two hours and 28 minutes online using a smartphone. For 18-to-24-year-olds, the average time spent online was three hours and 14 minutes.

Ofcom director of Market Intelligence, Ian Macrae, said: “Over the last decade, people’s lives have been transformed by the rise of the smartphone, together with better access to the Internet and new services.

“Whether it’s working flexibly, keeping up with current affairs or shopping online, we can do more on the move than ever before.

"But while people appreciate their smartphone as their constant companion, some are finding themselves feeling overloaded when online, or frustrated when they’re not.”