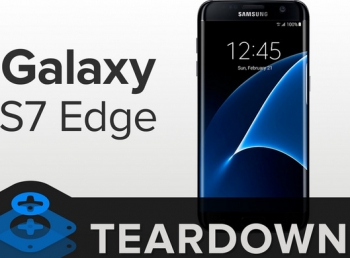 Q. What’s difference between the S7 and the S7 Edge?
A. The 5.5” rounded Edge screen; 5 grams and a few millimetres; and a massive 3600mAh battery is all.

iFixit has previously torn down the S7 (iTWire article here) and now the S7 Edge gets the treatment.

It finds that in making a better handset, the S-series continues the downward trajectory in reparability – three out of ten (the S6 was four out of ten). Still the usual repairs are glass/screen and battery, and these are replaceable by any skilled rocket scientist.

It also finds that more so than in the past, the S7 series share a very high commonality of components – that’s a good thing. Apparently previous iterations of Galaxy smartphones had different design teams and less commonality of parts.

The tear-down is on the US model using the Qualcomm Snapdragon 820, four-core, system on a chip (SoC). Australia gets the Samsung-made Exynos 8890 eight-core, mainly for its support of Australian and Asia Pacific LTE bands and speeds.

There has been a lot said about the pros and cons of both SoCs. There is no doubt that the 820 has some higher performance specifications – in essence, both have similar CPU performance, and the 820 has better graphics performance – some tests show up to 32%. Both have 4GB RAM and 32GB storage.

Samsung says that it is a matter of reality versus perception and in some respects the Exynos has superior in battery charging and management, less heat, and it works here!

I have been using the S7 Edge for a few days (iTWire first looks article here) – I also have the S6 Edge+ to compare it with. My initial impression was that at least superficially the S7 offered no compelling reason for S6 owners to rush out and upgrade.

While I do hold to that notion I am beginning to see some of the subtle advantages:

And for fear of upsetting iPhone 6s/Plus users: [square brackets are 6s/Plus respectively]

More in this category: « Android N – the beta is out Game tech applied to making homes 'dementia-friendly' »
Share News tips for the iTWire Journalists? Your tip will be anonymous