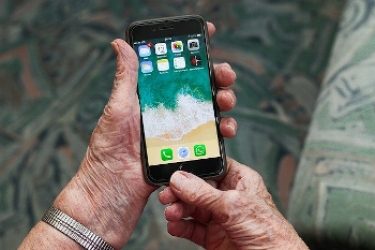 Image by rupert B. from Pixabay

The global market for refurbished smartphones in 2019 fell by 1% year-on-year to about 137 million units, the technology analyst firm Counterpoint Research says, adding that a 1% increase in the second half of the year was not enough to offset a decline in the first half.

In a statement, the company said growth in the second half, especially the fourth quarter, was strong as Apple upgrades came through.

Counterpoint research director Jeff Fieldhack said it was the first in four years that the refurbished market had fallen for the whole year.

"The trend is mainly linked with the downturn in new smartphone sales in key regions like the US, China, and Europe," he said.

"The sell-through in these regions combined declined 6% YoY during 2019. The upgrades in the premium segment also remained slow, as users continue to hold on to their devices and replacement cycles lengthen.

"Premium devices are key to refurbished device volumes in the mature economies. China, the largest market for refurbished devices, declined 4% YoY during the year. This was due to the combination of a sluggish economy and the fact that it is harder for players within the refurbished market ecosystem in China to make a profit. 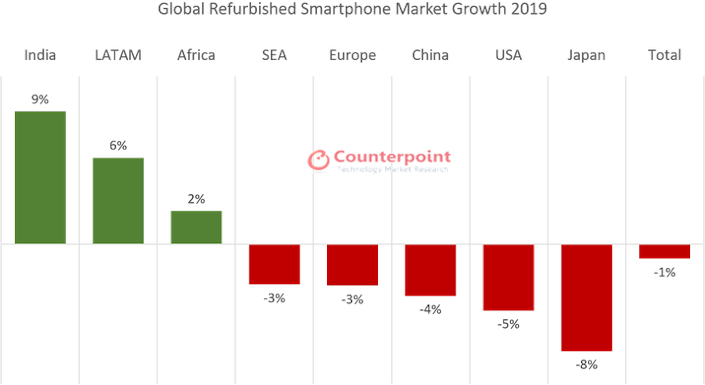 "The China-US trade tensions have also affected the secondary market as many large players are being much more cautious on purchases. Many of the smaller players in the ecosystem have seen growth, but it was not the case with the larger players."

Counterpoint found that Apple and Samsung were again the two dominant players in the refurbished market, with Samsung's Galaxy-S series the main driver for the South Korean conglomerate.

Regarding Huawei, it said the company's new sales and rebranding efforts had increased its share in the used and refurbished market but US sanctions were likely to affect sales outside China this year.

Despite the overall decline in the market, India, Latin America and Africa experienced growth.

Counterpoint research analyst Varun Mishra said: "The refurb ecosystem in these economies is at a nascent stage. In terms of smartphones, these markets remain underpenetrated.

"Many users are looking for affordable devices to come online. The transition from feature phones to smartphones and the aspiration to obtain premium devices at an affordable price point continue to fuel growth in these markets.

"There still needs to be more consumer awareness, standardisation in processes, and quality assurance to build consumer trust to fully tap the market potential in these regions. However, because of COVID-19, the growth of the segment will be impacted in 2020."

More in this category: « Huawei takes big hit to smartphone sales in Europe in 1Q2020 Qualcomm releases 6-series chip to power cheaper 5G smartphones »
Share News tips for the iTWire Journalists? Your tip will be anonymous