Potential for head-up display in Formula One: Hamilton 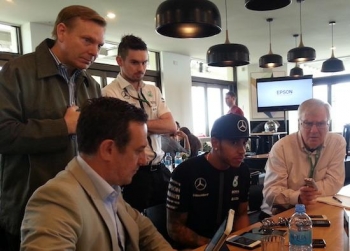 Mercedes AMG Petronas Formula One driver and reigning champion Lewis Hamilton says he doesn't know why head-up displays have not been investigated before in the sport.

"You always want to make it easier for the driver," he said. A huge amount of information is displayed on the steering wheel, but drivers have to take their eyes off the track in order to read it. It also means their eyes have to refocus twice.

The issue was raised in the context of Epson's sponsorship of the Mercedes AMG Petronas Formula One team, which will include the supply of Moverio BT-200 smart glasses, health sensing wearables, and business products.

Asked what type of technology would help him most, Hamilton joked "I need an R2D2 in the back."

Hamilton's teammate Nico Rosberg (pictured below) said he has been looking forward to a wrist-mounted heart rate monitor for 20 years. "I look forward to receiving [Epson's device] soon and using it in my training," he said.

Rosberg explained that during training he currently uses a heart rate monitor that fits around the chest, plus GPS devices for recording running and cycling sessions.

"Often heart rate monitors have difficulties in the car" due to interference from other electronic equipment, he said. "It'll be really interesting to gather some data" on using Epson's device in that environment. 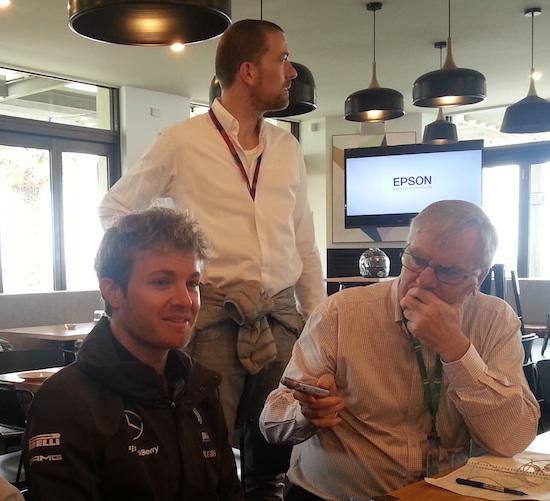 Hamilton said the team was working with Epson to see which parts of the company's technology portfolio meets their needs. "You can't just strap on a heart rate monitor," he said.

Though it's not just about the drivers. He pointed out that the pit crew "need to be fitter than ever."

Rosberg said "I do see a future" for smart glasses in Formula One, though the technology needs to become smaller and more integrated.

"I really like all these gadgets," he said, adding that his current favourite is his BlackBerry. BlackBerry is another Mercedes AMG Petronas sponsor.

Hamilton said he has been into gadgets since he was a child. "I never read the manual," he said, though one consequence was that he had only just discovered one particular function of a product he has been using for two years.

Epson general manager of brand and communications Ian Cameron (pictured top left with Hamilton) said the deal with Mercedes AMG Petronas was Epson's return to Formula One sponsorship after a 20 year break, and the company is "very pleased to be back in the fold."

Where the previous sponsorship was aimed at general brand awareness, the current goal is to change the general perception of Epson from a consumer printer manufacturer to a credible and professional supplier of business technology.

Already, 50% of the world's receipts are printed on Epson printers, and 40% of PowerPoint presentations are made using Epson video projectors, he said.

The "multi-year" contract - he would not be drawn on the exact length - has the potential to change the direction of Epson's smart glasses.

The relationship with Mercedes AMG Petronas has already seen Epson supply printers, scanners and projectors for use in the team's back office.

Ahead is the task of working out how Epson technology can help on-track performance through the use of smart glasses, wearables more generally, and other products, Cameron told iTWire. Improved communication and a better understanding of driver performance are ways this may be achieved.

Epson is already a preferred supplier to the Daimler group of which Mercedes is a part, he explained. This includes electronic devices for vehicles and robotics used in manufacturing.

Sponsorship of the Formula One team is "about deepening the relationship," Cameron told iTWire.