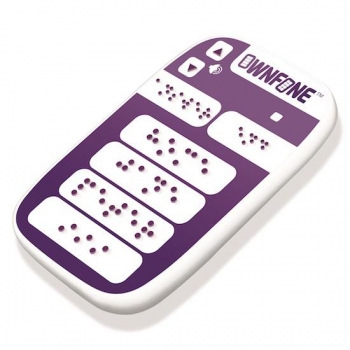 A mobile phone with personalised buttons with braille legends has gone on sale in Australia.

OwnFone has been selling mobile phones with two to 12 pre-programmed dialling buttons. The phones are intended for use by children (so they can only call the designated numbers) and by seniors (for ease of dialling in an health emergency - the phone is small and light enough to be carried on a lanyard).

One of the buttons must be assigned to 000. (For overseas readers, that's the Australian equivalent of 911 in the US, 999 in the UK, or 112 as specified by the GSM standard.)

The company has now extended the idea to offer a version with two or four buttons labelled in braille.

"Incredibly, OwnFone is the first in the world to sell a braille phone which is personalised for every user," said Tom Sunderland, the UK-based inventor of OwnFone.

"In the past, the cost of developing a braille phone versus the market size has been a barrier to entry. 3D printing provides a fast and affordable way to overcome this barrier."

OwnFone Australia director Brad Scoble said "OwnFone meets the need for a basic mobile phone to keep in touch. Smartphones are often too complicated, and in the case of people who are blind, not user-friendly."

He added "The braille phone complements our existing and popular OwnFone for kids and seniors. The only difference is in the design of the phone. Kids and seniors have the option of words or images as buttons, whereas people who are blind have braille."

According to the OwnFone Australia FAQ, the preprogrammed names or numbers can be changed up to three times every 12 months at no additional charge.

Prices of the braille OwnFone start at $89, with call plans from $2.35 per week.

More in this category: « Apple places iPhone 6 orders on top of solid earnings Retailer alert! Smart Aussie shoppers now doing it by phone »
back to top