OnePlus ties up with Hasselblad to improve cameras on flagship models 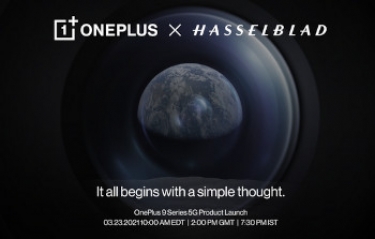 Chinese smartphone manufacturer OnePlus has announced a tie-up with Swedish camera maker Hasselblad to develop camera systems for its flagship devices, including the OnePlus 9 series which is to be launched later this month.

The technology analyst firm Counterpoint Research said in a brief note that other OEMs like vivo, Sony, Nokia and Huawei had all struck similar partnerships with camera makers like Zeiss and Leica.

OnePlus, one of three smartphone brands belonging to B.B.K. Electronics, is to invest US$150 million over three years to improve its cameras.

Counterpoint research analyst Maurice Klaehne said DXOMARK, which benchmarks smartphones based on specific criteria, had found the OnePlus 8 Pro to be in the top 20 but behind smartphones from Apple, Samsung and Google in performance, as these companies used better camera software.

He said in terms of specs, OnePlus flagship models had been very close to Samsung and LG but lacked the camera expertise that these firms had.

"This new positioning will put OnePlus on a better footing compared to other premium smartphones," Klaehne said. "Previous OnePlus 8 series devices have featured high refresh rate screens and fast wired charging (65W on the OnePlus 8T) and wireless charging (30W on the OnePlus 8 Pro) which helped the devices stand out somewhat from their competitors.

"An improved camera system will surely help the OEM gain some mindshare if the marketing story can be conveyed effectively."

The OnePlus 9 series will have a revamped camera system called Hasselblad Camera for Mobile.

"For now, the only specifications officially released include a custom Sony IMX789 sensor for the main camera which will enable 12-bit RAW while also making it up to 64 times more colourful than previous camera systems," Klaehne said.

"The Hasselblad Camera for Mobile will also offer improved HDR video recording, as well as support for capturing 4K at 120 frames per second.

"Lastly, as with almost all premium smartphones launched nowadays, the devices will include 5G connectivity."

OnePlus is not sold in Australia but models can be bought in other countries like India and China.

More in this category: « IDC sees 2021 global smartphone shipments increasing by 13.9% in 1Q Aspera R40 targets tradies and outdoor types »
Share News tips for the iTWire Journalists? Your tip will be anonymous