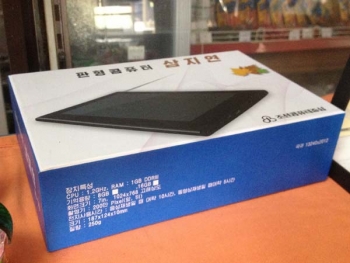 The world's strangest country North Korea is producing a surprisingly respectable touchscreen tablet, though don't expect it to challenge the iPad any time soon.

The Wall Street Journal is reporting a state-produced device known as the Samjiyon has been featured at Asian trade shows during the year, and one plucky traveler has gone into North Korea and brought back a Samjiyon tablet to show off to the rest of the world.

And the weird thing is it's not half bad.

IDG, a technology news service and trade publisher, has provided a report based on his review, reporting that the device boasts a 7-inch screen, 2-megapixel camera, a 1.2-GHz processor and it runs a version of Google’s Android operating system.

Several apps, including games like Angry Birds, come pre-installed, though the device has only a 1,024 x 768 pixel resolution display compared to the iPad Air's 2048 x 1536 resolution.

IDG said the information was provided by a tourist who asked that he be identified only by his first name, Michael, to ensure that he could re-enter the country.

The Samjiyon tablet, acquired at a gift shop in Pyongyang for US$200, is “surprisingly impressive,” IDG quotes Michael as saying.

“In terms of responsiveness and speed, it can almost compete against the leading tablets,” Michael said.

“Tapping and launching apps feels fairly fluid, initializing the camera is as fast as the world’s leading tablets, and there is no noticeable lag when playing games I’m familiar with, like Angry Birds."

Some features that rivals like the iPad will never include are an analog TV receiver, along with 'revolutionary literature', which one reviewer speculated could make it very useful as a research tool.

There is one massive feature missing, however.

North Korea’s policy of heavy web censorship means the tablet has no way of connecting to the internet, and instead can only access the state's heavily sanitised intranet.

Professor Ruediger Frank from the University of Vienna, writing on the tech blog 38 North, was critical.

"The tablet has obviously been made for people who mainly use it offline," he said.

"This gadget is not available to all North Koreans; just as a Mercedes Benz S-class sedan is out of reach for most Germans. The existence of this tablet does not in any way change the fact that [North Korea] is, for many of its people, a country of hard manual labour and simple living conditions.

"The Samjiyon is a useful and entertaining device for a minority in a totalitarian system with a dominant ideology."

South Korea's Samsung therefore seemingly has little to worry about... for now.