The first and second-generation iPads were officially known simply as iPad while they were current, so it should be no real surprise that the new model introduced overnight with a 2048x1536 resolution screen is still called iPad and not iPad HD. But predictions of 4G support proved correct.

Apple has followed the same 'Retina' route it took with the iPhone to deliver a new iPad with a 2048x1536 pixel display. Apple brags That's four times the pixels of the previous model, and a million more than a HDTV. The Retina designation indicates the way that the human eye cannot resolve individual pixels at normal viewing distances. 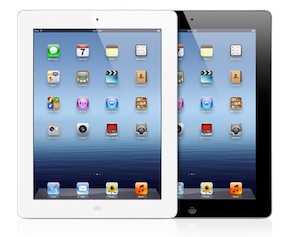 To drive those extra pixels, the iPad uses the new A5X chip with a quad-core graphics unit. Yet Apple still claims up to 10 hours battery life.

Other changes include the incorporation of the 5MP iSight camera with 1080p video recording.

In the fine print, Apple warns that "The iPad Wi-Fi + 4G model you purchase is configured to work with a particular cellular network technology", but also claims "iPad with Wi-Fi + 4G models connect to GSM/UMTS networks worldwide. If you want a local connection when you're travelling, just pop in a local SIM card." So it sounds as if you shouldn't expect to be able to use a 4G service while travelling overseas.

The new iPad runs iOS 5.1, which is also available as an update for older devices. New features and enhancements include a redesigned Camera app with video stabilisation technology, Personal Hotspot, the ability to delete photos from Photo Stream and support for dictation in English, French, German and Japanese.

Please read on for app updates and pricing.

Along with the iPad, Apple announced iPhoto for iPad ($5.49). Reworked to take advantage of touch and the Retina display, iPhoto allows side-by-side comparisons and fingertip brushes for image adjustments.

iMovie ($10.49) has been updated to support HD video and to generate "Hollywood-style" trailers with professional music soundtracks. Trailers can be uploaded to YouTube, Vimeo and FaceBook, or streamed to the Apple TV at up to 1080p.

The GarageBand app has also been updated with Jam Session (up to three iOS devices can be played and recorded as a group), Smart Strings ("play an entire string orchestra with just one finger") and Note Editor to fine-tune Touch Instrument recordings.

Keynote, Pages and Numbers ($10.49 each) have all been updated to take advantage of the Retina display, among other changes.

As usual, app updates are free to existing owners.

"With the introduction of iPhoto, we've brought the entire suite of iLife apps to iOS and users are going to love it," said Philip Schiller, Apple's senior vice president of worldwide marketing. "Whether brushing an effect onto a photo, shooting a movie trailer or jamming with friends to record a song, iPhoto, iMovie and GarageBand let you make amazing creations on iPad and iPhone."

Apple has begun accepting pre-orders for the new iPad (with a limit of two per customer) for delivery between March 16 and 22. In-store sales start on March 16. Australia is one of the first-release countries, along with Canada, France, Germany, Hong Kong, Japan, Puerto Rico, Singapore, Switzerland, UK and the US Virgin Islands.

If you prefer to save money, the previous model (now designated iPad 2) is still available at lower prices, starting at $429.

More in this category: « Indigo Telecom offers range of $0 upfront satellite phone plans The name of the next iPad »
Share News tips for the iTWire Journalists? Your tip will be anonymous