Microsoft is gunning for your Macbook with Surface Pro 3 Featured 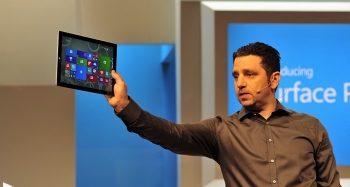 Microsoft has made a bold statement with its Surface Pro 3 tablet - it's the tablet designed to replace your laptop, and this time it might actually succeed.

While I previously thought Microsoft would be using today's 'small' event to be launching a Surface Mini, it instead surprised analysts by announcing its next Surface Pro - a tablet with a bold goal of using robust processing power and portability to finally work as a strong replacement to your laptop.

As with many laptops Microsoft is offering the Surface in different processor configurations, so it will suit everyone from the casual user up to the power entrepeneur. The tablet will run one of several different Intel Core processors, running from an i3 up to an i7, while internal storage ranges from 64 to 512 GB and RAM ranges from 4 to 8 GB. There really seems to be a whole gamut of options here.

Surface chief Panos Panay describes the new device as "the thinnest Intel Core product ever made," and it's clear Microsoft has Apple's Macbook range squarely in its sights. In fact, the company even showed off its new tablet on a scale against the MacBook Air to prove it's lighter than the Apple laptop - the Surface Pro 3 weighs in at 800 grams compared to the Macbook Air which is over a kilogram.

The tablet is just 9.1mm thick, compared to 10.6mm on the Surface Pro 2, and it boasts a supersized 12-inch screen, up from the 10.6-inch Surface Pro 2. Microsot says this change was "critical" as it steps up competition to traditional laptops, while the display also comes with a 2,160 x 1,440 resolution, meaning it has a higher pixel count than the 1080p HD displays seen in most HD TVs and some laptops.

This means the Surface Pro 3 also has a 3:2 aspect ratio, rather than the unwieldily 16:9 ratio of the earlier tablets. The company also intriduced a new stylus for the tablet that the company wants to be as natural as an actual pen.

The tablet can now convert pen-written text to digital content almost instantly, allowing users to write notes that are converted into digital text quickly and painlessly. There is also a feature that allows the user to click a button on the back of a pen to instantly open a new note on the Surface Pro 3. After writing out the note, another click on the pen’s button save’s the note to OneNote and syncs it to all of your other devices.

All signs are pointing to Microsoft actually taking its claim of the Surface Pro 3 being a laptop replacement seriously - it will do everything your current laptop can do, but a lot more, too. The tablet, which will run a full version of Windows 8.1, won't be released until 20 June but until then I have high hopes the Surface Pro 3 will finally be everything Microsoft wants it to be. It just might redefine the laptop race, for the better.

More in this category: « Microsoft re-Surfaces - the details ZTE wants to become ‘As easy as ABC’ with its V969 »
Share News tips for the iTWire Journalists? Your tip will be anonymous