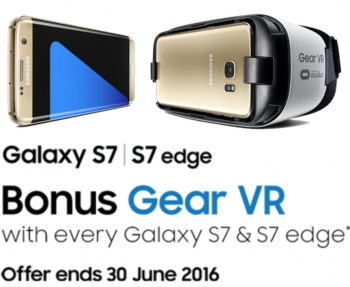 Kantar praises Samsung for not only getting the S7 specs right, but its promotions right as well.

Respected analyst and research firm, Kantar, has put out a blog post (set to go live here later today if not already as you read this) celebrating Samsung’s success with its S7 and S7 Edge sales.

Noting the range’s launch on 11 March 2016, Kantar’s blog states that ‘the Samsung Galaxy S7 and S7 Edge became an immediate hit among US consumers, capturing 5.8% of Q116 smartphone sales.’

Indeed, we’re told that ‘the Galaxy S7 was the fifth best-selling phone in Q116 despite only being available for the last few weeks of the sales period.’

This is in contrast to the S7’s predecessor, the Galaxy S6, which Kantar says ‘was the 10th best-selling smartphone (3.2%), after its launch in the three months ending in April 2015.’

So, asks Kantor, ‘what is Samsung getting right now that they didn’t last year?’

Well, we’re told that ‘when the Galaxy S7 was announced at the tail end of February 2016,’ Kantar wrote that ‘the new model would address most of the shortcomings of the Galaxy S6, most notably the lack of removable storage, while also improving camera quality and overall speed.’

Now that the S7 has a month of sales under its belt, Kantar invites us to ‘look some of [its] claims and how consumers have responded.’

Kantar reports that ‘among Galaxy S7 and S7 Edge buyers who purchased the devices in March, the leading purchase driver was battery life, with 53.5% citing it as the main driver of handset choice.

‘The battery on the S7 is larger than on previous iterations (though according to some- battery life is not significantly improved), and ships with fast and wireless charging (50% of the battery life in 30 minutes).’

Kantar says that ‘this is the first Samsung device to do so, though this feature was available as an accessory for earlier models.’

We’re then told that the ‘quality of the camera was also an important driver for S7 buyers—specifically, for 50.9% of them versus 33.5% of overall smartphone buyers for the period.’

So, says Kantar, ‘Samsung got the specs right—and consumers responded. But is that all?’

Generally, Kantar says that ‘when we ask consumers what influenced their decision to purchase their model, getting a good deal on the price of the phone is always the top influencer (43.9% of smartphone buyers in Q116 versus the next nearest purchase influencer: exclusive phone promotion or offer at 19.9%).’

However, Kantar notes that ’38.8% of Galaxy S7 and S7 Edge buyers were influenced by an exclusive phone promotion or offer, 12.2% by a free or discounted product, 11% by a trade-in scheme, and 10.3% by free or discounted accessories.’

Indeed, Kantar states that ‘the Galaxy S7 and S7 Edge appears to be one of the most heavily promoted phones, ever.’

These are US stats, but if you ordered an S7 before March 18th, you got a Gear VR and six VR games for free.

Kantar notes that ‘AT&T and T-Mobile offered “buy one, get one free” deals for a time. Best Buy included a Gear VR and a 64gb SIM card with the purchase of an S7. For purchasers of the S7 at Costco this month, they’ll get a 32-inch Samsung HD TV. And that’s barely scraping the surface of the promotions and trade-ins available for this device.’

With strong sales in the first few weeks boasted by heavy promotions across carrier and independent retailers, Kantar says it can ‘can well expect the Galaxy S7 to become the best-selling phone in Q2 of this year.’

Meanwhile, ‘the Galaxy S6 was never able to capture the top spot, remaining the second best-selling phone behind the iPhone 6, and then the iPhone 6s.’

The big question thus remains, as Kantar asks: ‘As the big promotions subside and are replaced by smaller and subtler deals, how will the S7 fare?’

Time will tell, and we will see, but my personal thought is that the Samsung S7 is certainly an excellent premium smartphone, even in the face of the strongest ever competitive threats from HTC and LG, while the iPhone 6S and 6S Plus still remain strong competitors - with the iPhone 7 looming in the future.

Until then, though, Samsung’s sales should remain strong, and we look forward to seeing what Kantar has to say the next time it releases its smartphone OS percentage stats!

More in this category: « Android growth in EU highest in over 2 years, Samsung S7 selling well Samsung Galaxy Note 6 leaks – no its water resistant »
Share News tips for the iTWire Journalists? Your tip will be anonymous