If you've been hankering for an iPad case that came with a built-in Bluetooth keyboard, iPad accessory company 'PADACS' has just released one for the Australian market!

The iPad. It's the device that has finally popularised tablet/slate/pad computing, but even though it has a stellar on-screen keyboard, even Apple knew that some iPad users would always want the option of using a physical keyboard.

Thus, Apple launched its own 'wired' iPad keyboard dock, enabled Bluetooth allowing the use of any Bluetooth keyboard, be it Apple's own models, Microsoft's, Logitech's or anyone else's, and even allows iPad camera kit accessory owners to plug a USB keyboard into the USB accessory for wired keyboarding.

But the idea of a case or clamshell with a built-in Bluetooth keyboard was something that many speculated on seeing relatively quickly after the iPad was launched, and while it has taken a few months, they are now on the market.

Some of the models or at least 'concept' cases I've seen online over the past few months looked like a white Macbook with the iPad replacing the standard MacBook screen, but as you can see from the photo of PADACS' Bluetooth keyboard case on page two, called the Toccata, this one is a little more reminiscent of Apple's standard iPad case, except with a keyboard in place of the protective 'flap'.

Toccata? I was wondering, too. The press release helpfully clears it up by noting that, for the etymologists, Toccata comes from the Italian word toccare 'to touch', and describes a composition for the piano, organ or other keyboard instrument that's intended to show off the player's technique.

Well, the price is AUD $89.95, and as such comes in significantly cheaper than at least Apple's own keyboard and case, so the price certainly seems quite reasonable.

As for how nice it is to type on the Toccata, I can't yet say as I'm yet to request a review unit, something I will be doing following the posting of this article, but PADACS says it's great - as you'd expect.

Specifically, PADACS says the Toccata has a '235x135mm QWERTY keyboard [that] is large enough to type comfortably [on] without adding to the iPad case size.'

Continued on page two, where you can also see a photo of the Toccata and iPad in action'¦

We're also reminded that the case will actually need power and charging, but there's no need to worry about AA batteries. Instead, the Toccata has a built-in lithium ion rechargeable battery, charged by USB cable, and runs 'for as long as 45 hours', or clearly nearly almost two full days of non-stop typing, with a 'standby time' of 100 days.

The distributor of the PADACS range of iPad accessories in Australia is a company called PCRange, and its CEO Raj Menon gave his naturally positive thoughts on what could potentially be a hit product in the Toccata press release.

Menon mentioned that 'The case's modern design combines a professional look with great functionality', and added that 'you can fold the case into the laptop position to use the keyboard, angling the iPad screen for ideal viewing, or fold the keyboard back out of sight when you don't need it. Its sturdy construction protects your iPad while magnets on the front cover keep the case closed when you're not using the iPad.'

Some of the other technical details are as follows:

- Compatibility with Windows, Linux, Mac and iOS 4.
- The keyboard pairs easily with devices, going into auto-sleep mode after 10 minutes of inactivity and automatically reconnecting when it's switched back on.
- Its built-in 450mAh Lithium battery lasts for as long as 45 hours per charge with continuous standby for 100 days.
- Running on the ISM 2402-2480MHz band, the keyboard has a 10-metre operating distance.

PADACS have also been busy releasing a range of other iPhone 4 and iPad accessories, none of which I've recently had the time to look at, but the ones brought to our attention in the Toccata press release are as follows:

- Aksent High-Definition In-Ear Earphones (AUD $69.95) for the iPhone and iPad, offering easily-reached controls and foam ear cushions that mould to the ear canal
- UltraCharge (AUD $119.95), a portable power supply unit for the iPad, iPhone 4 and 98 per cent of current mobile devices.
- Mini Bluetooth Keyboard (AUD $69.95), a slick pocket-sized QWERTY keyboard that works with an iPad, an iPhone 4; an iPhone 3G running iOS4 and many other handsets.

So'¦ if you want an iPad case and Bluetooth keyboard in one, the Toccata is the first I've personally seen available in the Australian marketplace, and while I'm yet to do a proper review with a loan Toccata unit to see what the feel of typing is like under my own fingertips, it looks like a nifty problem-solving 'twofer'! 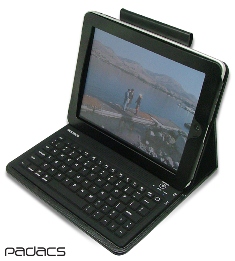 More in this category: « VHA more than doubles mobile data caps Microsoft dials up devs for Windows Phone 7 »
back to top