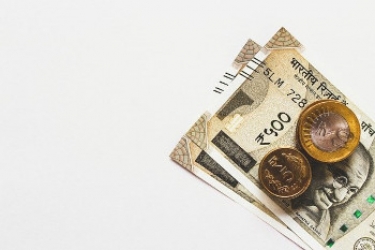 Image by Free stock photos from www.rupixen.com from Pixabay

Indian smartphone shipments fell by 48% in the second quarter of the year, the analyst firm Canalys says, adding that the drop, to 17.3 million units, came as the country faced a shutdown of its economy until May due to the coronavirus pandemic.

India, with a population of 1.35 people, is the second biggest market for smartphones after China.

In a blog post, Canalys said the industry was hit by a double whammy: it had to deal with both low supply and diminished demand, leading to a situation where offline retailed were told not to sell smartphones.

Chinese brand Xiaomi retained its position as the top seller in India, grabbing 31% of market share, with 5.3 million units shipped during the quarter.

In its wake came vivo, which also retained its second spot, with 21.3% of the market and 3.7 million units. 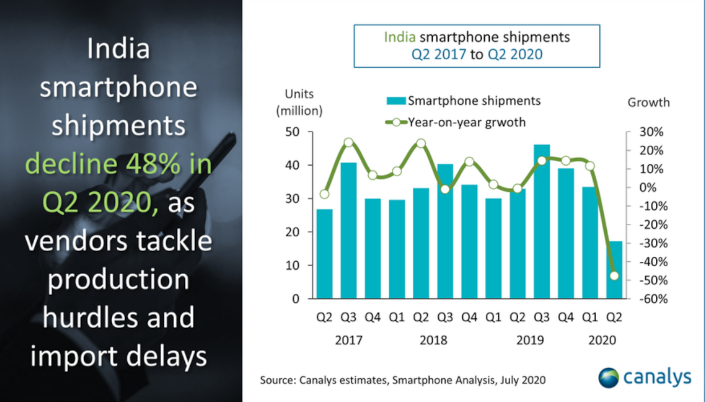 South Korean giant Samsung saw its exports affected when its biggest manufacturing plant outside Vietnam shut down for most of the second quarter. The company shipped 2.9 million units.

Fourth was the Chinese brand OPPO, which edged out its stablemate realme. OPPO shipped 2.2 million units compared the 1.7 million shipped by realme.

Apple was the least affected among the top 10 brands with shipments falling just 20% year-on-year to just over 250,000.

The company recently announced plans to diversify its supply chain and is pushing partners Foxconn and Wistron to step up investments in India.

“It’s been a rocky road to recovery for the smartphone market in India,” said Canalys analyst Madhumita Chaudhary. “While vendors witnessed a crest in sales as soon as markets opened, production facilities struggled with staffing shortages on top of new regulations around manufacturing, resulting in lower production output. 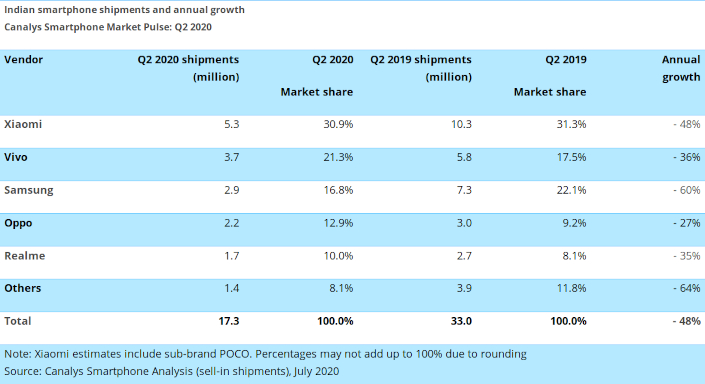 "The fluidity of the lockdown situation across India has had a deep-rooted effect on vendors’ go-to-market strategies. Xiaomi and vivo have undertaken an offline-to-online strategy to support their massive offline network.

"Online channels, too, while seeing a positive effect of the pandemic on market share, have seen sales decline considerably.”

Canalys pointed out that India was also battling floods in the east of the country and was involved in a stand-off with China on its northern borders.

“Luck is not on the side of the Chinese vendors,” commented Canalys research analyst Adwait Mardikar. “There has been public anger directed towards China. The combinations of this, and the recently announced ‘Aatmanirbhar’ (self-sufficient) initiatives by the government, have pushed Chinese smartphone vendors into the eye of the public storm."

Canalys estimated that more than 96% of the smartphones sold in India in 2019 were made or put together locally.

“Vendors are driving the message of ‘Made in India’ to consumers and are eager to position their brand as ‘India-first'," Mardikar said. "Despite the sentiment, the effect on Xiaomi, OPPO, vivo and realme is likely to be minimal, as alternatives from Samsung, Nokia, or even Apple are hardly price-competitive."