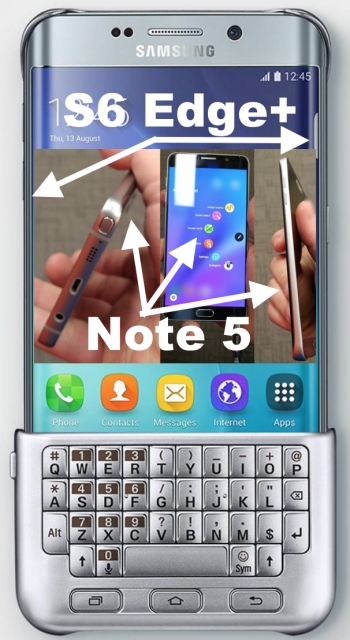 Samsung is expected to launch the Galaxy Note 5 and a Galaxy S6 Edge+ at its Samsung Galaxy Unpacked 2015 event in just hours.

Just as we have times of the year when Apple launches new gear, so too are there times when Samsung does the same for its own new flagship devices, with Samsung still the top Android brand.

Original story continues below including details on how and where you can watch the replay of Samsung's August Galaxy Unpacked Live 2015 event - please read on!

These events are called Samsung Galaxy Unpacked events and we’ve already had one back in February this year when Samsung unveiled its radically new Galaxy S6 and S6 Edge smartphones unto the world for 2015.

Now comes the second big Samsung Galaxy Unpacked event for 2015, this time in August, which will showcase the stylus-equipped Galaxy Note 5 and a larger new S6 Edge Plus or Edge+ as it will apparently be officially titled.

This larger model may even come with a physical keyboard option or add-on as leaked by Evan Blass with a photo on Twitter.

Ray will also be covering the event and will have a report for iTWire readers, and I’ll be tuning into the event, too. Note - that report is now available to read here.

The Samsung Galaxy Unpacked August 2015 event will be held in New York at Lincoln Center tomorrow, which is Thursday 13 August at 11am in the US, 3pm GMT and 4pm in the UK, but which is 1am on Friday 14 August for Australians in the AEST time zone.

As per usual, the event can be watched live via Samsung’s ‘Samsung Mobile’ YouTube page here.

It will also be interesting to see whether Samsung will launch a third-generation model of its Gear VR headset, one that would, you’d hope, work with either the Note 5 or the S6 Edge+ rather than requiring separate versions, as is currently the case with one version for the the Note 4 and another released earlier this year to accommodate both the S6 and S6 Edge models.

As Ray also notes, Samsung is also expected to unveil a round smartwatch with rotating bezel, either called Obris or Gear A.

Currently Samsung’s YouTube channel has February’s S6 and S6 Edge introduction video listed from 5 months ago which has had, at time of publication, 32,724,162 views, although as we get closer to the event’s kick-off, there’s sure to be a change to indicate a live event will be about to happen soon.

Besides having the event available for anyone to watch and stream either live or once the event has concluded, Samsung will also be making a stack of information available at its official press site which you can visit here.

Samsung Electronics Australia will be holding a briefing for Australian technology media with Prasad Gokhale, Vice President, IT and Mobile, on Tuesday, 18 August 2015 - both Ray and I will be attending the event and we’ll present any additional findings thereafter, as well as a live video recording of the Australian event.