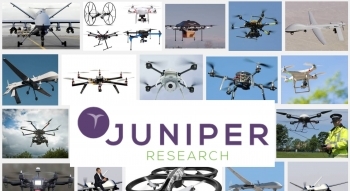 Annual sales of drones will approach US $500 million in 2016, with agricultural applications to boost the market but delivery deployments are raising safety fears.

Juniper last spruiked its drone research in November last year, as we reported in iTWire, but it has today announced new details.

The research gurus at Juniper say that ‘annual revenues from commercial drones sales are expected to reach $481 million this year, up by 84% on last year’s figure of $261 million.’

The company’s research, entitled ‘Drones: Consumer & Commercial Applications, Regulations & Opportunities 2015-2020,’ which as always is on sale to relevant parties at relevant prices - found that a low price point had significantly reduced the barrier to entry in many sectors, with high performance models now available for less than $3,000.

It claimed that the reduction in drone price points had in turn resulted in their commercial application within an array of new fields including mapping, inspection and monitoring.

The research argued that strongest growth would occur within the agricultural sector, which Juniper expects to account for 48% of all commercial drone sales this year. Here, UAVs (Unmanned Aerial Vehicles) help save time and costs over other methods, such as walking fields on foot and using planes for fly-over filming.

Furthermore, the ease of use of a UAV created for the sector allows for more regular crop surveying.

Meanwhile, the research also found that demand for UAVs in the film and television sectors is soaring. Drones provide a much cheaper and more flexible alternative to the use of helicopters and other methods to capture footage for the film and TV industry, particularly for action sequences.

However, the research cautioned that a raft of privacy, safety and security concerns mean that the usage of drones for delivery purposes is likely to be severely constrained or even prohibited within built-up areas.

According to research co-author Dr Windsor Holden, regulators would be extremely wary of allowing planned services such as Amazon Prime Air and Google’s Project Wing to be offered except as a means of delivering to isolated rural communities.

“Regulators are understandably concerned that the deployment of delivery drones in inner cities would significantly increase the risk of potentially fatal collisions with cars or even pedestrians,” Holden warned.

The research also claimed that there was a danger that delivery drones could be hacked by terrorists, conceivably delivering an explosives payload into areas where they would be capable of causing high levels of civilian casualties.