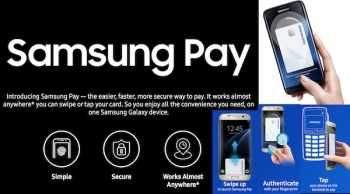 If you’re a Amex or Citibank customer, or want to become one, you can now use those institutions’ cards with compatible Samsung smartphones and its new mobile payments system.

That system is called Samsung Pay, and is clearly being billed as offering Australia consumers and businesses "a secure, fast, and simple way to pay" – while sounding very similar to the name a different fruit-flavoured phone company has called its payments system.

Samsung Pay works "almost anywhere" using a participating credit or debit card from the aforementioned institutions and presumably all the banks and organisations that follow, including for loyalty cards.

The "almost anywhere" claim has the caveat that "availability almost anywhere is based on compatibility of Samsung Pay on MST and/or NFC payment terminals, with some supported for use only after software upgrades".

Samsung also advises that "Samsung Pay will be available soon for Galaxy S6 and S6 edge on the Telstra network", with the service "exclusive to selected Samsung Galaxy smartphones only, and available across all participating payment networks, banks, and merchants".

Prasad Gokhale, vice-president, mobile division, Samsung Australia, said: “Today’s launch of Samsung Pay offers more than a secure and convenient way for Samsung smartphone owners to pay. It’s the next development for Australians who use their smartphone as the central device to live, organise and enjoy their lives.

“Australia is a market of early technology adopters and by providing a platform open to all partners, ranging from government to financial institutions and retailers, while upholding the highest standards of security and data privacy, Samsung is fuelling the transition to a truly digital wallet,” continued Gokhale.

Here is the full launch video from today’s event – the rest of the article continues below, please read on:

Samsung proudly boasts that the arrival of Samsung Pay in Australia "follows successful launches in South Korea, the United States, China and Spain".

Elle Kim, global vice-president, Samsung Pay, Mobile Communications Business, said: “In the first six months of launching in (South) Korea and the US, Samsung Pay has surpassed more than five million registered users and today has processed more than US$1billion of transactions in South Korea alone.

“This success indicates a tremendous opportunity in Australia, a market where contactless payments are already in strong demand.”

At the launch, Samsung Pay partners in Australia will be American Express and Citibank.

Citibank credit card cardholders as well as American Express Issued Card Members will be able to use Samsung Pay, with a compatible Samsung smartphone, at participating retailers.

“American Express is not only striving to be where our customers are, but also looking for more ways to integrate rewards and loyalty into the payment experience, so that when our customers use their phones to pay, they are earning rewards as well.”

Amex advises that "the addition of Samsung Pay to the American Express digital payment portfolio means that about 90% of its card members who already use their smartphones with us can now make mobile payments".

Amex also has an "exclusive launch offer", which is that "American Express card members who use Samsung Pay three times on any purchase over $5 will receive a one-off $15 statement credit, available until 14 September".

In addition, Amex states "card members are not the only beneficiaries, with thousands of store-based merchants Australia-wide adding Samsung Pay to their variety of payment options for customers."

Article continues below, with another video at the end of this article showing the system in operation, please read on:

“Citi credit card customers can now simply and securely use Samsung mobile phones to tap and pay for purchases in Australia and overseas.”

Samsung’s Elle Kim added that: “Samsung Pay is strategically expanding its partnership ecosystem to provide greater flexibility, access and choice for our customers.

“Samsung Pay adopts an open engagement model, designed to support payment and non-payment cards from multiple providers. By doing this, Samsung can operate seamlessly with a wide range of partners, systems and payment channels,” Kim added.

Outside payments, Samsung says its pay service "has the potential to be integrated with an array of partners, ranging from major retailers to government departments and ticketing companies".

Partner integration is even simpler with Samsung Pay because the technology utilises Near Field Communication (NFC) and Samsung’s proprietary technology called Magnetic Secure Transmission (MST), making it the only payment solution with wider acceptance – which means it works with older payment terminals, which are common in countries like the US where wireless NFC tap-and-go systems are still only slowly being rolled out.

Kim added: “The MST technology enables Samsung Pay to support partners that use a traditional magnetic stripe, commonly found on loyalty cards, gift cards and transit cards, both in Australia and across the globe.

“It’s our goal to one day replace wallets, by making every card accessible on Samsung smartphones. In countries like Australia, where customers are already using their smartphones to make payments, our customers will certainly value the benefits of having all their cards in one place and Samsung Pay will provide that convenience to them,” Kim concluded.

Each transaction uses an encrypted digital token to replace a user’s personal payment information and payments can only be authorised with an approved fingerprint or PIN. Samsung’s industry-leading KNOX security platform also monitors malicious software and activities on a user’s device for added security and protection.

To make a payment on Samsung Pay, simply swipe up, choose the desired payment card, authenticate the transaction with the fingerprint sensor and tap the device on the point of sale terminal.

Samsung Pay can be used in an offline mode, should customers be located in areas without Internet connectivity.

Here’s a video that shows how easily the system works, which I recorded live today at the Australian Samsung Pay launch, showing both NFC and MST scenarios.

More in this category: « Mobile international remittances: $25 billion-plus by 2018 5G the key to speed, connectivity, and capacity »
Share News tips for the iTWire Journalists? Your tip will be anonymous