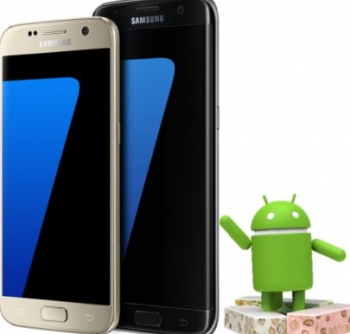 Samsung has rolled out its Galaxy S7/Edge Android Nougat update released by Indian Telcos over the past few days. LG, HTC, Nexus, Moto, Sony and more are all finalising updates too.

There were complaints that the Samsung upgrade was 1.3GB but there is a lot more to the update than just a new Android kernel. Samsung has obtained Wi-Fi certification, an internationally recognised seal of approval for products indicating that they have met industry-agreed standards for interoperability, security, and a range of application-specific protocols. The update also includes a new lighter TouchWiz user interface, updated Always on Display, VR, updated Knox, Samsung Pay, all Nougat security patches, and more.

Samsung has a policy of providing at least the next version of Android (called N+1) for compatible devices. Its Note 5, Galaxy Tab S2, Galaxy S6/Edge/+ will be the next devices on Samsung’s update roster.

Initial reports are that the new OS is faster, the new interface is snappier and cleaner, and there are a host of new features including that Google now issues security and kernel updates independently of the carrier and handset.

Why is Android Nougat important?

Android has been the target of cyber criminals ever since it was rushed out to counter the first iPhones. Google needed to reign in the fragmentation, ramp up security, and take back basic control of Android and the hardware it runs on. Marshmallow 6.x set the scene and Nougat 7.x takes it a huge step closer.

But more importantly, manufacturers don’t want the responsibility of rolling out security and kernel patches so it's win-win. Nougat allows them to customise the User Experience, add custom apps, and that is about it.

Android Authority has information on the other brands rolling out Nougat here.

What about Android O?

Google usually releases its next version of Android — in this case, “O” (some suggest that it will be called Oreo after the cookie) — at its Developer I/O conference each year in May. As is usual, those flagship phones that started as Android 6.x will stop at 7.x (N+1) but Google says that now it has drawn a line in the sand at Android 7.x and future upgrades will be much easier unless it needs new hardware in later ARM chipsets.

More in this category: « Samsung Galaxy Tab S3 release end of February OPPO ON TOPPO IN CHINA IN 2016 »
Share News tips for the iTWire Journalists? Your tip will be anonymous