China maintained its position as the world's top smartphone market, with 369 million units in 2019. But this was a drop of 7% year-on-year, with 4G phone sales slowing while there was less demand than anticipated for 5G models.

Technology research firm Canalys said the drop was bigger for the fourth quarter, with shipments down by 15% to 85.3 million units.

There is as yet no indication how the coronavirus will affect the market, but there is sure to be a major impact.

Canalys said Huawei maintained its lead in China with 39% market share in the fourth quarter, growing 11% year-on-year. OPPO, vivo, Apple and Xiaomi took the remaining spots in the top five in that order.

While Huawei shipped 33 million units in the fourth quarter in China, Canalys vice-president of mobility Nicole Peng sounded a note of caution about the non-stop growth. 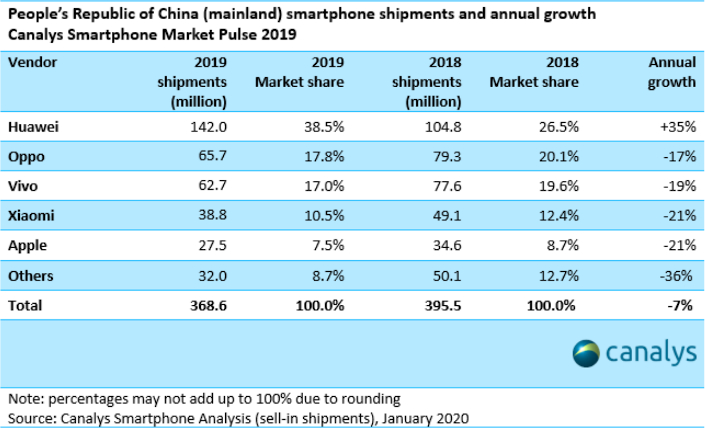 "Channel inventory build-up in Q2 and Q3 adversely impacted Huawei's performance in Q4," said Peng. "Huawei will find it challenging to persuade smartphone distribution partners to increase wallet share of its devices in 2020, as the sell-out of 4G smartphones, especially the mid to high-end, is becoming difficult.

"Despite Huawei leading the 5G smartphone shipments with a 78% share, the vendor must help channel partners ease the 4G device inventory pressure before more 5G devices flood the market."

The fourth quarter was a good one for Apple which reversed its decline in China, grabbing 11.4% of the market, its biggest share in eight quarters, with shipments of 10 million iPhones.

"The competitive pricing of the iPhone 11 was a big contributor to Apple's Q4 result," said Peng. "Given the industry is heading full speed to displace 4G with 5G phones, consumers are likely to pause phone replacement to future-proof devices.

"The iPhone 11 series is bucking the trend and was the best-selling 4G device in the China market. It has demonstrated there is still a strong pull factor for Apple's products, at the right price, given the hardware and service ecosystem strength. This will help with a better than expected upgrade rate when its 5G iPhone finally arrives."

Canalys said OPPO and vivo, brands both brands belonging to BBK Electronics, had been hit by a lack of what it called "channel appetite" in the fourth quarter.

Research analyst Louis Liu said there were some positive notes. "vivo became the second largest in 5G smartphone shipments following Huawei in 2019, with 1.2 million units shipped. OPPO's new Reno brand also started to show promise, as its Reno 3 series shipped over 400,000 units within a week. Each vendor is determined not to lose share to Huawei and [both] are ready to fight with stronger 5G smartphone portfolios in 2020."