After Sydney's UberPool launch, Melburnians can UberPool from 11 June 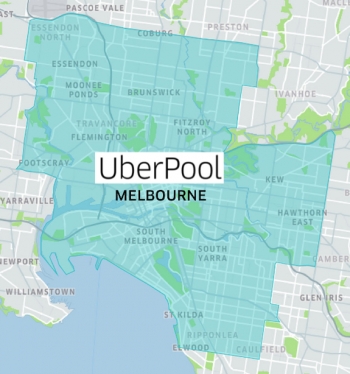 I've used UberPool a few times in the US last month, and this nifty and very affordable service is finally launching in Melbourne next week, after having launched in Sydney in April.

UberPool. It's a great way to share your ride with others going in a similar direction to you, and to split the cost, making your Uber bill even lower.

Uber has chosen Melbourne as the second Australian city in which it is launching its UberPool service, with the company stating that Melbourne is consistently one of the world’s most liveable cities.

However, says Uber, Melbourne "is at risk of losing the highly coveted title with congestion levels increasing year-on-year".

The company has quoted studies that "have shown that there is a strong decline in the quality of living when 40% congestion is reached", with this number being one "that Melbourne is fast approaching, according to the 'Austroads Congestion and Reliability review' on page 40".

Considering 74% of Melbourne residents rely solely on their cars to get to work, we're told "it should come as no surprise that tackling the issue of congestion would help keep this highly liveable city on top".

Uber says it believes "the future success of how our cities move will rely on getting more people into fewer cars", and thus it is "excited to be launching UberPool in Melbourne, enabling people to travel around one of Australia’s most thriving metropolitan cities sharing the ride and the savings".

We're reminded that Uber first piloted the service "in Sydney in early April", as reported in iTWire at the time, and is now a standard feature for Sydney Uber users, with Uber now saying it is "ready to launch UberPool in Melbourne".

It will arrive from 11 June, and people living in Melbourne can select the UberPool option in their Uber app, allowing them to share a ride with people heading in a similar direction, and saving them up to 50% on their trip (compared with uberX).

Lucas Groeneveld, Uber's state manager for Victoria and Tasmania, said: “After testing out the service in Sydney, we’re excited to be launching UberPool in Melbourne. UberPool helps make it easy and affordable for people going in a similar direction to share the trip and save some money.

"We’re confident that over time, UberPool will help solve congestion on Melbourne roads, and allow a quicker, more enjoyable commute.”

By helping get more people into fewer cars, we're told that "UberPool can help achieve better utilisation of the resources we have on Melbourne roads, cutting congestion and pollution".

So, how has the service fared thus far in Sydney, pun intended?

Uber tells us: "We have already seen this impact take hold in Sydney, with approximately 200,000 kilometres saved with fewer cars travelling on inner city roads since launch.

"In cities around the world where Pool is available, around 20% of all rides taken with Uber are pooled rides."

How does it work, you ask?

1. Request and wait to know your pick-up spot

Enter your destination and request UberPool. Then, wait a few minutes upfront while your trip is matched with other riders heading in a similar direction to find an efficient trip.

2. Walk to your pick-up spot

With UberPool, you’ll walk a short distance to a pickup spot near you – simply follow the in-app walking directions. This helps keep detours to a minimum and pickups faster for everyone.

UberPool matches you with other riders heading in a similar direction. When you share the ride, you also share the cost, saving up to 50% on your trip, compared with uberX.

4. Walk to your destination

You’ll be dropped off close to your destination. You’ll need to follow the walking directions in the app for a short walk to your chosen destination.

Naturally, this leads the company to state that UberPool is a proven model, and I can attest to this after having used it in San Jose and Berkeley, CA, where I was directed to walk a short distance to a pick-up spot, and then dropped off close to my destination, again with a short walk to where I wanted to go.

There's also the fact, as noted above, that means cheaper rides for passengers.

However, there is a small difference with the US UberPool service, where they have both UberPool and Express Uberpool. As Mashable notes, UberPool in the US is a direct point-to-point service, while the Express version requires you to walk a little, saving drivers time on detours, as explained here.

UberPool Express is cheaper in the US, and that's the version we're getting here.

Uber itself has a page for Australians that explains how UberPool works down under, and how it compares to UberX, with the company stating: "UberPool in Australia "is more affordable because the cost of the trip is shared. The cost per trip is up to 50% less than UberX (which in the past has typically been our cheapest service) whether Uber matches you with another passenger or not."

Less congestion on the city streets over time:

"UberPool is a convenient way for people going in a similar direction at a similar time to share the journey. It’s also another tool to help cities solve congestion and pollution. And because UberPool is cheap and easy to use, over time it offers a credible alternative to car ownership. If you can press a button and get an affordable ride within minutes, why bother to own a car at all?"

Areas where UberPool is available in Melbourne from 11 June:

"The UberPool service area extends from Coburg in the north, to Hawthorn, down to Balaclava in the south and then to Footscray in the west."